Luca Malatesti (left in the picture below) and Filip Čeč (right) collaborated on the project Classification and explanations of antisocial personality disorder and moral and legal responsibility in the context of the Croatian mental health and care law (CEASCRO), funded by the Croatian Science Foundation (HRZZ-IP-2013-11-8071). 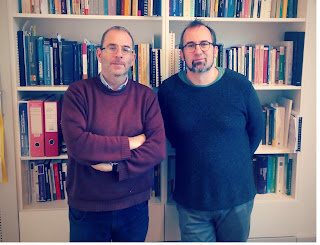 In this post Luca and Filip summarize their chapter ‘Identification and self-knowledge’, that is contained in the collection edited by Patrizia Pedrini and Julie Kirsch, Third-Person Self-Knowledge, Self-Interpretation, and Narrative.

According to “Real Self” accounts, an agent is morally responsible when she acts or thinks because of propositional attitudes, such as beliefs and desires, that, in virtue of a process of identification of the agent with them, belong to her real self (Frankfurt 1971, 1988; Watson 1982, 2004). This process is taken to lead the agent to embrace and internalize these mental states in a way that they come to reflect what she really is.

Matt King and Peter Carruthers criticized these accounts of responsibility (King and Carruthers 2012; see also Carruthers 2011). They argued that these doctrines necessarily require that identifying with a propositional attitude involves knowing it transparently. This means that the agent has a privileged and unmediated epistemic perspective on her mental states over the indirect access that others might have to them.

Moreover, they argue that contemporary cognitive science offers evidence that there are no conscious propositional attitudes and decisional processes that would ground such transparency. According to them, the only objects of transparent knowledge are perceptual and sensory data that are exploited by mentalizing mechanisms to ascribe propositional attitudes to ourselves and others.

We respond to King and Carruthers that a Real Self account of responsibility and autonomy does not require transparency. First, we maintain that two types of self-knowledge or stances towards our mental states are involved in the formation and preservation of the real self. The former consists in the agent knowing that she does not endorse a certain mental state that she takes to occur in her. In this case, we say that the mental state has for the agent an objective character.

The latter stance involves accessing the mental state as having a relational character. With this we intend to say that the agent recognizes that the mental state is placed within the normative demands that stem from her other mental states, in a way that enables subjects to endorse or reject that mental state. Consider, for instance, the case of an agent who is deliberating when facing two conflicting desires. She must recognise that these two desires are offering different incompatible reasons for what she should do.

Second, we argue that a transparent access to sensory and perceptual data is enough to support these two types of self-knowledge. We maintain that the process of identification with our mental states can be based on interpretative self-attributions of propositional attitudes.

These self-attributions might be based on sensory and perceptual evidence concerning our present and past behaviour and the surrounding conditions and imaginative anticipations of future events. After all, although we cannot identify with the mental states of other people based on perceptual information about their behaviour, we can build a narrative about them and discriminate what can be plausibly taken to be the mental states they identify with.

In a similar way our identification can be based on processes of self-interpretation. Moreover, for doing this, we have at our disposal sensory, perceptual, and self-specifying information that is not similarly available to the others.