I Err, Therefore I Think 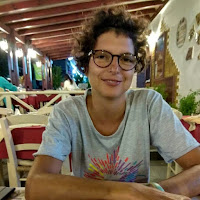 Today's post is by Krystyna Bielecka (pictured above), assistant professor in the Institute of Philosophy at the University of Warsaw. For her PhD, Krystyna investigated the concept of mental representation and its use in philosophy and cognitive sciences. Her PhD thesis entitled, Błądzę, więc myślę. Co to jest błędna reprezentacja? (in English, “I err, therefore I think. What is misrepresentation?”), was awarded the Jerzy Perzanowski Prize by Jagellonian University (Poland) for the best PhD Thesis in Cognitive Science in 2016.

Recently Krystyna has obtained a research grant from the the National Science Centre (Poland) to pursue her research interests in the application of the concept of mental representation to certain psychopathologies. In the project, she asks whether certain mental illnesses, such as OCD, psychoses, or certain symptoms of mental disorders, such as confabulations or cognitive and emotional impairments of empathy, are necessarily representational and when it is reasonable to explain them without using the concept of mental representation.

Philosophers of mind and cognitive scientists discuss the nature of thoughts, how they acquire content, and what it means that thoughts correspond to reality. The modern debate over contentful thoughts, or mental representations, is dominated by the question of how to naturalize content. For example, Daniel Hutto and Eric Myin are skeptical whether any naturalistic theory of mental representation could ever naturalize contents understood as satisfaction conditions (which is what they dub “The Hard Problem of Content”).

The detectability of errors is a necessary condition for the further possibility to correct them, which is fundamental for learning. Furthermore, the argument for the possibility of misrepresentation is based on the premise of overall rationality of cognitive agents - only if they can have access to the content of their mental states, they can recognize their mistakes in order to correct them.

Not all accounts defended today tackle this problem, and even if they address the possibility of error (as Fodor, Fred Dretske, or Ruth Millikan do), they do not account for how error is detectable by the system. In the book I develop a novel proposal: a coherence model of representational error that can be recognized by the cognitive system within the teleosemantic framework.

This model is based on the idea of system detectable-error as defended by Mark Bickhard, extended by adding an inconsistency condition, which states that the adequacy of mental representation is available to the system as long as it can detect informational inconsistency. My next project is to extend the model and test how it applies to certain psychopathologies.

My book is now only available in Polish but the English translation is currently in preparation.