In this post I am interested in the depiction of mental health issues in books aimed at young children. There are two interesting books addressing the issue of what the depression of a loved one means for the children involved. The first is The Colour Thief, by Andrew Fusek Peters and Polly Peters, illustrated by Karin Littlewood (Wayland 2014). The second is Virginia Wolf, by Kyo Maclear and Isabelle Arsenault (Kids Can Press 2016). 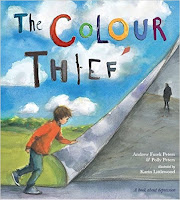 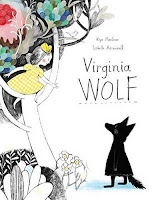 There are some interesting similarities in how depression is described in the two books. In both books, the point of view is that of a child. In The Colour Thief, a boy observes his father as he gradually falls prey to depression. The father soon gets to the point where he does not go out anymore and stays in bed all day. In Virginia Wolf, a book inspired by the relationship between the author Virginia Woolf and her sister Vanessa, a child called Vanessa witnesses a curious transformation in her beloved sister Virgina. Virginia becomes, quite literally, a wolf.

Another common point is that depression is described as a change in a person's behaviour but also in the world around the person. In The Colour Thief the sky becomes grey and all other colours disappear as the boy's father's depression deepens. Depression stole all the colours from the world.


He said that all the colours had gone. Someone had stolen them away.

Similarly, in Virginia Wolf Virginia's mood changes, from happy to sad at the start of the story, and from sad to happy at the end of it, are presented as changes in light, from bright to dim and from dim to bright.

In both books the children witnessing depression want to do something to improve the situation and feel to some extent responsible for the changes their loved ones are experiencing. In The Colour Thief the son often wonders whether it is his fault that his father is sad, and in Virginia Wolf Vanessa tries everything in her power to make her sister feel better. There is an attempt to show what the effects of depression are on children who are sensitive and full of compassion.

Both books end with the people affected by depression "finding themselves again": they enjoy being outside after being locked inside, they desire closeness after avoiding all social contact. Father and son go for a walk, Vanessa and Virginia go out to play. 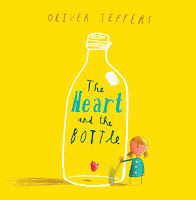 A book focusing on the lasting effects of grief is The Heart and the Bottle by Oliver Jeffers (Harper Collins 2010). In the story, a little girl who was full of curiosity and imagination decides to take her heart out of her chest and keep it in a bottle tied around her neck after her dad dies. All the curiosity and the imagination disappear from her life -- she lives in the same house, close to the same sea and the same stars that before filled her with wonder, but she experiences nothing at all.

I am not sure whether the book is supposed to be about depression, but seems to capture another important aspect of it in a way that is intriguing for children, and with illustrations so beautiful that take your breath away.