This post is by Michiel van Elk who works in the Religion, Cognition and Behavior Lab at the University of Amsterdam and is currently a Fullbright Visiting Scholar at Stanford University. He recently published a paper on the self-attribution bias and paranormal beliefs in Consciousness and Cognition. 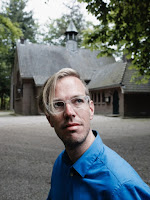 My name is Michiel van Elk and I am intrigued by religious and spiritual experiences. Why do some people have paranormal encounters? What causes people to experience the feeling that another invisible being is present? How do mystical experiences and feelings of transcendence come about? As a researcher working at the Religion, Cognition and Behavior Lab at the University of Amsterdam, I aim to answer these questions. I often go into the field to study religious experiences, but also conduct lab-based studies using a variety of different psychological and neurocognitive techniques.

Together with my colleagues we found for instance that mystical experiences can be induced through the use of an alleged God Helmet, capable of inducing such experiences. However, unbeknownst to our participants the helmet was actually a placebo device and all experiences that people reported were self-generated, based on prior expectations and by using sensory deprivation (i.e., participants were blindfolded and were wearing headphones on which white noise was presented). In another study we showed that when participants had a self-transcendent experience, their brain showed decreased activation in regions involved in self-referential processing. This indicates that a key feature of the awe-experience is a reduced focus and awareness of the self – in line with recent studies showing similar effects when participants used psychedelics (e.g., psilocybin).

In a recently published paper – also building on our earlier work - we were specifically interested in the psychological mechanisms underlying belief in paranormal phenomena (e.g., seeing auras, Tarot card reading, Psi etc.). We investigated to what extent believers in paranormal phenomena showed a tendency to take credit for positive outcomes in a game of chance. In the scientific literature this phenomenon is known as the self-attribution bias. It has been argued that the self-attribution bias reflects a motivated and adaptive tendency to maintain a positive image of oneself. Following the observation that many psychic believers often tend to attribute positive outcomes (e.g., ‘I found the partner of my life’) to a specific paranormal activity they undertook (e.g., ‘That must have something to do with me visiting the astrologist’), we hypothesized that psychics would be more willing to take credit for positive outcomes that were in fact determined by chance.

We indeed found a positive correlation between belief in paranormal phenomena – and specifically superstitious beliefs – and the self-attribution bias. In contrast to earlier findings we could find no evidence for a relation between paranormal beliefs and the illusion of control, i.e., the general overestimation of the amount of control that can be exerted over events. Furthermore, by using open-ended questions we obtained some insight in the motivations underlying belief in paranormal phenomena. Many believers indicated that they became intrigued by paranormal phenomena because of an extraordinary experience that they encountered at some point in their lives.

This research project is ongoing and with the people in our lab we still regularly attend paranormal fairs in the Netherlands to conduct field studies. Eventually we hope to provide a unifying account of why people believe in the supernatural and the specific role that religious experiences play in the emergence of belief.