How Different are Implicit Attitudes?

In this post, Sophie Stammers, Research Fellow on Project PERFECT at the University of Birmingham, introduces her article, “A Patchier Picture Still: Biases, Beliefs and Overlap on the Inferential Continuum” recently published Open Access at Philosophia. 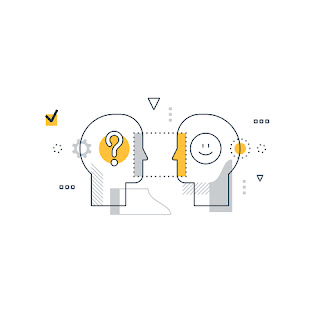 Many theorists have made sense of these results by proposing that the human mind is comprised of two systems: the explicit system handles the conscious, rational, deliberate and avowed processes that we expect to be engaged in, whilst the implicit system is behind the above findings (Kahneman 2011).

The success of our explanations and predictions of cognition depend on whether we’re right to posit a second system with distinctive characteristics. So too do our conceptions of what it is to be a person, and how we should think about interpersonal interactions involving these supposedly distinct systems. For instance, if the implicit system produces cognitions or behaviours that aren’t identified with the agent, then we shouldn’t judge interactions driven by it as agential. But if that’s not the case, then maybe those judgements are back on the table.

Characteristics (a)-(d) each deserve attention, but for now, let’s look just at (b). Some psychologists (e.g. Gawronski and Bodenhausen 2014) have explained evidence for (b) by proposing that attitudes are differently structured: explicit attitudes are structured propositions, processed in accordance with their semantic content, whilst implicit attitudes are mere associations between concepts and are processed regardless of information about their constituent concepts. These latter attitudes don’t respond to evidence.

Contra this view, Eric Mandelbaum (2016) summarizes a range of findings purporting to show that implicit attitudes are in fact sensitive to content, proposing they are structured propositions after all. But can this explain findings that many other implicit attitudes fail to respond appropriately to content?


Neil Levy (2015) thinks not, proposing that implicit attitudes and beliefs may have their propositional structure in common, but maintains that the former respond to evidence and modulate other attitudes in a far more fragmented and ‘patchy’ manner than beliefs. For him, this renders implicit attitudes a sui generis class, distinct from our everyday beliefs: the patchy endorsements.

But I’m not sure this gets things right either. We’re now not talking about the structure of the attitudes in question, we’re talking about the extent to which they respond to content. That’s a subtler suggestion which admits of degrees and, as I demonstrate in the paper, it commits the patchy endorsements theorist to two claims:

In the paper, I argue that both the stronger claim, SGC, and the weaker OCC fail to hold. I present a range of studies which show that at least some implicit attitudes respond appropriately to content. But, moreover, I show that at least some beliefs are more ‘patchy’ in their responsiveness to content than at least some implicit attitudes. People fail to update their beliefs in light of evidence in all sorts of situations. Superstitious beliefs and explicitly prejudiced beliefs are like this, in fact, these beliefs can be extremely unresponsive to content, and can be maintained in the face of much counterevidence.

I propose that there is a picture that captures the finding that many implicit attitudes are unresponsive to content, whilst many beliefs respond appropriately, without committing to the former constituting a sui generis class (on the basis of their content-responsiveness, at least). This is the continuum view, where attitudes, both implicit and explicit, are ordered along a continuum as regards the breadth of content-driven processes in which they feature. At one extreme end, we find only attitudes that, in other relevant respects, are implicit (perhaps they’re not typically conscious or avowed), and at the other, attitudes such as beliefs (typically conscious and avowed), but in the middle is an area of overlap of both beliefs and implicit attitudes. That we find this overlap means we’ve been assigning a property - ‘patchiness’ - that doesn’t pick out a sui generis class after all.

This argument doesn’t yet show that implicit attitudes might not constitute a sui generis class with respect to some other features. However, if any other characteristics had (supposedly) only by explicit attitudes admit of degrees, and we find some otherwise implicit attitudes which have those characteristics to some degree, then we might have further continuums. If the relevant OCC and SGC claims are violated, then there might be more patches of overlap. That would make for a patchier picture, and one that I’ll continue to investigate.

This isn’t to say that there’s no such thing as implicit attitudes. Rather, it is to stress that it is important to be clear about the relationship between implicit attitudes and more familiar attitudes such as beliefs, and not to overstate the extent to which beliefs sustain a rational and deliberate self, a self that stands in stark contrast to our implicit attitudes. I’m suspicious, and I think that perhaps the contrast has been previously exaggerated.