The Meaning of Belief

I have written five books on the nature of the mind, which is my principal area of interest in philosophy. But I also have a long-standing interest in the nature of religion and religious belief, and The Meaning of Belief is my first serious attempt to write on this subject. 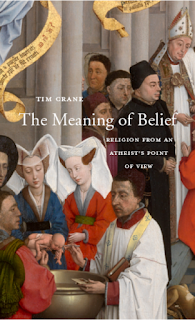 The Meaning of Belief attempts to give a description of the phenomenon of religion from an atheist’s point of view — that is, on the assumption that there is no god, supernatural or transcendent reality or being. The book’s aim is not to argue for this atheism, but to give a description of religious belief which makes sense to believers themselves.

In this respect the book differs from many recent atheist books on religion, which aim to show that most of what counts as religious belief is both false and irrational. These books — by the self-styled ‘New Atheists’ — tend to emphasise the cosmological element of religious belief, treating belief as a kind of primitive science or as a rival to science. The Meaning of Belief challenges this view of religion — cosmological claims, claims about the universe as a whole, are important to most religions, but they are not scientific claims.

The alternative view of religion which the book expresses is built around two ideas. The first is what I call the ‘religious impulse’: the idea that there is something ‘beyond all this’, this world, something transcendent, which gives human life meaning in a way that even believers do not fully understand. The second is identification: the fact that a religion is something that joins people together in a community whose practices give them deep links with other people in other places and times.

What links the religious impulse and identification together in the single phenomenon of belief is, I claim, the phenomenon of the sacred. Sacred objects, rites, texts are conceived as pointing ‘beyond’ themselves to a transcendent realm (a realm which, according to the atheist of course, does not exist). But they also tie believers together with others in their religious communities — defined, as Émile Durkheim said over a century ago, by their relations to sacred things — and also with other believers in the past, who have belonged to the same religious faith.

In the rest of the book I argue that the New Atheists are not just wrong in their description of the phenomenon of religion, but they are also wrong in the practical attitude they recommend towards this phenomenon. Broadly speaking, they think the world would be a better place without religion, and they use scientific and philosophical arguments to attempt to persuade the religious out of their errors.

I am sceptical about whether the world would be a better place without religion, but I am even more sceptical that it can be eliminated by means of rational argument. Given this, atheists need to find a way of living alongside the religious, which should work in different ways in different parts of the world. I argue that atheists should tolerate religion, not because they think it is worthy of respect or because they do not want to offend anyone, but because they should be aiming to live in peace with those with whom they disagree. For the same reasons, the religious should tolerate atheists.