Does philosophy have a purpose outside academia? What does philosophy look like when it’s done beyond the walls of the lecture theatre and the seminar room? And who should get to do it? I got to think quite a bit about these questions recently. It was back at the start of 2017 that I travelled to London to meet some of the senior team from mental health charity Mind in Camden to discuss the possibility of developing a series of philosophy workshops, based on project PERFECT’s research, and running them at Mind in Camden, for people with lived experience of unusual beliefs and experiences, and mental distress, as well as for service providers and mental health advocates. 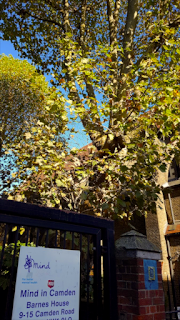 Mind in Camden runs training, support and capacity building services to benefit people who are struggling with mental distress, and I saw commonalities between its values and the sorts of conceptions of mental health and rationality that we’re arguing for through PERFECT. So, the organisation was a natural partner in this collaboration.


The idea of the workshop series was this: in groups of around 10, we would learn some philosophical techniques, and set up a receptive space for debate in which to exercise these, and then, drawing on aspects of PERFECT’s research, and inviting reflection on lived experience, we would explore and critique different theories of mental health and rationality.

It’s the first time I’ve done something like this with project PERFECT. As I sat on the 29, chugging up Marylebone Road, on my way to the first session, I did wonder to myself: would any of this be of any use – or interest – to Mind in Camden’s members?

Several months later, I can honestly say that these philosophy groups were the setting for some of the most generous, thoughtful and productive philosophical discussions I’ve had the pleasure to be a part of.

PERFECT challenges the notion that there is a special kind of irrationality that is identified with mental illness and distress, and participants drew on these ideas in the workshops, developing their own philosophical frameworks to critique the “us” and “them” view of the mentally well and the mentally ill that is dominant in a lot of our everyday discourse, and in some aspects of the clinical encounter, to re-conceptualise different experiences of mental health as instead as occupying space on a continuum. The workshops also provided the philosophical backdrop for exploring the potential psychological and epistemic benefits of unusual experiences and beliefs – such benefits are often underexplored in psychiatric practice.

We held a final day-long workshop in late January this year where participants presented assignments they’d been working on over the winter. Some considered the ways in which philosophy could make a positive difference to self-understanding and mental health advocacy, whilst others were inspired to work themes from the workshop series into poetry. Another presentation considered how philosophical questioning could be used to improve the clinical encounter. I came away from the day with a lot to think about. 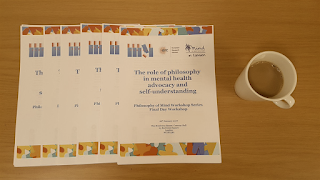 There were frustrations too, and acknowledgments of the limits to the progress that we were able to make in the group alone, as well as limitations on who we were able to influence, and by no means was there agreement on all points - of course it probably wouldn’t have qualified as philosophy if there had been…

We received some really wonderful feedback from both participants and our partner organisation. Furthermore, Mind in Camden has disseminated our workshop materials to all members and followers, and is incorporating aspects of materials into their training. As philosophers, it can sometimes be hard to trace the changes that our work makes in the world, but this felt really tangible.

I’m currently exploring opportunities to run the workshop series again, this time with a group of clinicians. I’ll keep you posted on how this goes.

As for the workshop materials, you might be interested to learn that these have been written up into a resource pack that you can view, download and use, for free, on our website here. The materials are designed so that they can be used by people who do not have any formal training in philosophy, and include slides, handouts and a more stripped-down pack on core themes and questions.

I talk a bit more about some of the motivations for the collaboration, and the development of the resource pack, in this post on Daily Nous.
Posted by Sophie Stammers at 08:00