On 9th January at the Royal Society of Medicine an event took place, Global Mental Health: Children in Crisis. 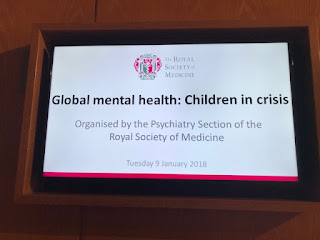 The first speaker, Vikram Patel (Harvard Medical School), presented a lecture on how to prevent mental health problems in children. He highlighted the importance of linking epidemiological and neuroscientific data. From en epidemiological perspective, deprivation is a very significant risk factor for mental health problems, comparable to what smoking is for lung cancer. And most mental health probelms begin before the age of 24. From a neuroscientific perspective, the brain is very plastic in young adulthood. The prefrontal region of the brain (linked to executive decision making) matures 5-8 years later than the limbic region (linked to basic emotional reactions).

Adversities associated with poor developmental outcomes include:
The need for responsive parents and the experience of stressors (especially toxic stress, continuous state of stress without support by adults) determine the architecture of the brain and shape brain circuitry (Centre on the Developing Child, Harvard University). We need nurturing, stable and engaging enviroments for children to develop.


So risks factors for mental health issue are primarily (1) missing interactions with relevant adults and (2) excessive, prolonged stress. How these factors impact on health depends on the life stage of the child, whether the adversities occur in the first five years of the child's life or later on in adolescence.

In the first 5 years of life, home, school, and neighbourhood are the most significant environments. Structured play has a very strong impact on the wellbeing of young children. Children whose parents play engagingly with them become better educated, more healthy adults, and they go on to earn more than children who did not receive the same attention.

The principles of structured play are:
We know now much more than we previously did about the adolescent brain. The prefrontal cortex matures well after the limbic system and that is why juveniles in all species, not just humans, are more risk-taking. In the face of social adversities, teenagers are more vulnerable. Adversities include family disruption, early age of puberty, violence in the community, digital world, use of alcohol and energy drinks, rigid social norms about gender and life choices.

Interventions at this stage cover parental involvement, activities promoting agency and participation in schools, focus on emotional competence, reducing exposure to harmful behaviours (substance abuse). Interventions that aim at enhancing agency in young people and improving school climate have the following goals:
Interventions with the goals above have been shown to reduce bullying and depressive symptoms. But the problems with the current programmes are that interventions are fragmented and episodic and the focus tends to be on specific behaviours and risks. Moreover, there is a lack of youth leadership and engagement, and a lack of coordination across sectors.

To try and overcome some of these issues there is a Wellcome Trust Public Engagement initiative in India inviting young people to talk openly about they feel: www.itisoktotalk.in

Second speaker was Theresa Betancourt (School of Public Health, Harvard) who discussed resilience and protective factors in war-affected youth. There are nowadays 250 million children who live in regions where there is armed conflict. In modern warfare civilians are not protected and acts of terrorism target schools and hospitals. Children exposed to this suffer from anxiety, depression, post-traumatic stress disorder, and other mental health issues. And there is very little longitudinal research on developmental outcomes: family, community, society at large are involved.

Sierra Leone in on the coast of West Africa. One of poorest countries on Earth, with high infant mortality and very low life expectancy. In the recent conflict (the civil war in 1991-2002) many kids were abducted and used to inflict violence on their own communities (as child soldiers). This was done deliberately to prevent them from running away and finding refuge in what was once their homes. After the war, there was an attempt to reintegrate children in their communities, and prepare the children and their families for the children to return home.

Research wanted to explore protective factors in these traumatic situations. It was a challenge to think about mental health in a way that made sense in the culture of the communities involved. New findings are now available about the long-term consequences of war. Education and employment as protective factors were studied and unemployment was much higher than national average for the people who were child soldiers. And males perpetrated intimate partner violence at a much higher rate than national average. Rates of depression, PTSD and anxiety were very high: about half of the sample experienced symptoms. The study also looked at stigma and family acceptance in the sample at different stages.

Children were abducted at the average age of 11 and socialised by an armed group for 3 years: this meant being forced to fight, to use alcohol, to engage in sexual intercourse. Stigma affected the abductees when they grew up, and their lives were characterised by suicidality, violence on partners, mental health symptoms, and use of alcohol. Social support and family acceptance ameliorated all these adverse outcomes and behaviours. When there was no family acceptance or support in the community, then outcomes were very poor and people got isolated and failed to integrate.

Many interventions being tested were about sending people to school or offering them jobs, but often these people were not ready for those experiences because they could not cope with challenges. So the project Youth Readiness was designed to improve the chances of people who had experienced trauma. The process involved STABILIZATION, INTEGRATION, and CONNECTION, and promoted psychoeducation, emotion regulation, cognitive restructuring, behavioural activation, and interpersonal skills.

Intergenerationally, children of people who were traumatised in war experience emotional problems positively correlated with family violence, and inversely correlated with parental involvement. They are also punished more severely than the national average. This means that interventions should not stop in adolescence but continue in adulthood to equip people with the capacity to be involved parents.