This post is by Matthew Ratcliffe, Professor for Theoretical Philosophy at the University of Vienna, Austria. Ratcliffe also leads the Phenomenological Psychopathology and Philosophy of Psychiatry research group. Most of his recent work addresses issues in phenomenology, philosophy of mind, and philosophy of psychiatry. He is the author of: Rethinking Commonsense Psychology: A Critique of Folk Psychology, Theory of Mind and Simulation (Palgrave, 2007), Feelings of Being: Phenomenology, Psychiatry and the Sense of Reality (Oxford University Press, 2008), and Experiences of Depression: A Study in Phenomenology (Oxford University Press, 2015).

In this post Ratcliffe presents a review of his most recent book Real Hallucinations: Psychiatric Illness, Intentionality and the Interpersonal World. 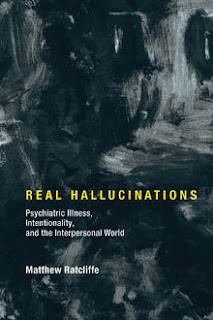 When we perceive something, we seldom wonder whether we are actually perceiving it rather than imagining or remembering it. Perceptual experience ordinarily incorporates a pre-reflective sense of perceiving, an observation that applies equally to other types of intentional states. For instance, what we imagine is usually experienced as imagined. In Real Hallucinations, I develop an account of what this sense of being in an intentional state consists of, through an exploration of various changes in the structure of intentionality that can occur in psychiatric illness.

One might think that the sense of being in one or another type of intentional state is easy enough to characterize: it is a matter of experiential content. Certain aspects of perceptual content are specific to perception in one or another modality; aspects of imagined content are specific to one or another type of imagining; and so forth. However, I show that this cannot be the case, as sense and content are dissociable. To do so, I offer a detailed examination of thought insertion (TI) and auditory verbal hallucination (AVH). I argue that many of those experiences referred to as TI and/or AVH involve a sense of perceiving something, but without the usual perceptual content.

An experiential content resembling that of inner speech, autobiographical memory, or some form of imagination comes to be associated with the sense of encountering something perceptually. In such cases, the sense of perceiving is usually incomplete and often conflicted, resulting in an intrinsically strange experience that stands out as distinct from mundane forms of intentionality. I go on to show how experiences like this tend to arise in the context of much more pervasive but less pronounced disturbances of the structure of intentionality. This approach, I suggest, also applies to many other anomalous experiences that are labeled as “delusions” and “hallucinations”.

The next step in my argument involves emphasizing the extent to which and the manner in which the anticipatory structure of experience is interpersonally sustained and regulated. It follows from this that a change in how one relates to other people in general is, at the same time, a change in the structure of intentionality. To develop my case, I consider forms of experience associated with trauma, schizophrenia, and profound grief.

I maintain that the modal structure of experience is essential to what we might call the most basic sense of “self”, and so the integrity of self-experience depends on a certain style of immersion in the interpersonal and social world. All forms of psychiatric illness that involve disturbances in the structure of intentionality are thus relational rather than individual in nature. This has potentially important implications for the causal explanation, classification, and treatment of psychiatric illness.
Posted by Valeria Motta at 08:00