Today’s post is provided by Jorge Gonçalves of IFILNOVA, Universidade Nova de Lisboa (UNL) and the Lisbon Mind & Reasoning Group (group included in IFILNOVA). In this post he provides a summary of his chapter "Why are delusions pathological?" in Hipólito, I., Gonçalves, J. Pereira, J. G. Schizophrenia and Common Sense: explaining the relation between madness and social values. 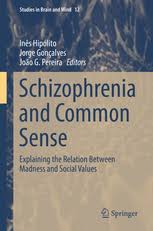 The aim of the article is to identify a characteristic of delusions: that which makes them pathological. This aim may appear a bit strange at first because one believes that delusions just are a pathological alteration of the mind. However, some authors have shown that although pathological delusions are the most studied, not all delusions have necessarily harmful consequences for the delirious subject or for others. Hence, it seems pertinent to question what makes delusions a pathological state.

“Pathological” is here understood as that which damages the subject (not that which deviates from the norm). Delusions are defined in DSM-5 as “false beliefs” but some have been argued that delusions are not beliefs but another kind of mental state. Here I adopt a model – the Multiple Realities Model - that considers delusions as experiences, not beliefs. But at the same time I admit the two perspectives are not incompatible.

The Phenomenological Multiple Realites Model of Schütz/Gallagher maintains that everyday reality is not the only reality in which consciousness can be found. There are several realities, each having a different cognitive style. Usually the so-called “accent of reality” is placed on everyday reality, which is the paramount reality. In this reality, we accept the given world without questioning it, without questioning its reality. But Schütz refers to and analyzes other realities, highlighting their relationship with everyday reality: the worlds of fantasies, dreams, scientific theory, art, children’s game, and the insane. Gallagher includes here “delusion”.


The model explains certains paradoxes of delusion, for example, the internal incoherence of the actions of subjects with delusions: a subject can alternate between states of delusion and states of everyday consciousness. Viewed from the outside one can think that the subject does not believe in her delusion. However, a subject can have beliefs within the delusion so there is no incompatibility between the subject’s experience of the delusion and having a belief in the delusional thought. From the point of view of others the beliefs of the subject are about external reality, but the beliefs are actually about another reality: the reality of the delusion.

How can the pathology of delusions be understood within the model of Multiple Realities? In contrast to dreams, fiction and other alternative realities there is a conflict between delusion and everyday reality. This happens because in delusion there is no suspension of belief (as happens in fiction, for example). The subject mixes the alternative reality “delusion” with everyday reality. Delusion is not an intellectual game but a powerful experience that involves the entire life of the person. But why must this experience be considered pathological? It separates the subject from the shared world with others yielding isolation and maladjustment. That is why people with delusion asked for psychiatric help.

But not all delusions have harmful consequences for the life of the individual. Jackson (2007) refers three kinds of delusions that can be benign for the individual: survival in extreme conditions, creative activity and mystical experiences. They are delusions because they are a reality alternative to everyday reality and the two realities are confused. However, the content of that alternative reality does not have negative consequences for the life of the subject. Hence, if one analyses pathology by its consequences, not all delusions are harmful, some of them can have positive effects.