This post is by Robert Nash. Robert A. Nash is a Senior Lecturer in Psychology at Aston University, and a recent presenter at TEDxBrum. Much of his research is focused on biases and distortions of memory, and their implications in various real-life contexts. In this post, he talks about his recent edited book (with James Ost, University of Portsmouth), entitled False and Distorted Memories. 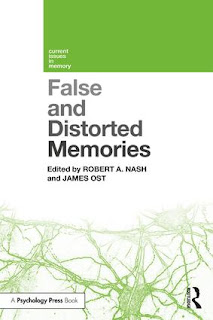 Psychologists have been writing about and studying the reconstructive properties of memory for more than a century. Nowadays, hundreds of scientific papers are published every year that further propel our understanding of how people use memory to reconstruct the past.

So why, despite all of these decades of studies, do so many of the general public still subscribe to the idea that remembering is infallible, like the re-playing of a video recording? Why hasn’t all this scientific research had a much more tangible influence on what people believe about memory?

In our recent edited book False and Distorted Memories, we proposed that at least three factors may contribute. The first is that mistaken views of memory are difficult to change because they are deeply ingrained, not only individually but also culturally and even linguistically.

The second factor is that it can be uncomfortable for us to suppose that our autobiographical identities, our values and our viewpoints, could be based partly on fiction, and we might therefore intuitively resist entertaining such notions too seriously.

The third factor is that the concept of ‘false memory’ is for many people inexorably linked with controversies around putative memories of childhood trauma, a link that has arguably often skewed discussions of the countless ways—positive and negative—in which distortions of belief and memory touch our remembered lives.

In False and Distorted Memories we aimed to draw together leading experts to illustrate the current state of knowledge on the psychology of false memories. But we also wanted to underscore the relevance of memory distortions beyond the clinical and legal domains. The book begins with timely updates on two of the classic, contentious questions in this field: Are memories of trauma more reliable than non-traumatic memories? Can children’s memories ever be relied on in court?

The chapters that follow move away from these traditional battlefields by showing, for instance, how false beliefs and memories might arise from the photographs we see in the media and in our own photo albums, from the sincere interactions we have with our neighbours, and from the fictional stories we read.

Historically, much of the false memory literature has focused on the effects of externally-provided misinformation. Several of our chapters, in contrast, focus on how false beliefs and memories develop in the absence of misinformation. Zaragoza and colleagues’ fantastic research on ‘forced confabulation’, for example, shows that false memories can arise when we knowingly speculate about events that we do not recall. A recurrent theme is the role of cognitive fluency, as explored in depth by Eryn Newman, who explains that many memory errors likely begin not with a suggestion, but with an idea or mental image that comes to mind with unexpected ease.

The final chapters explore what happens after false memories have been created: increasingly a key focus of research over the past decade or so. Participants in the lab often remember things that are untrue, but do they ever behave differently as a result? What happens once they find out that their memory is false? Answering these kinds of questions is pertinent to our understanding of the real-life implications of the distortions we observe in the lab.

It is apparent that many “common sense” beliefs about memory and remembering are still being challenged, even on the shoulders of so many decades of research. We concluded by considering the conceptual and empirical directions in which the false memory literature may move in the next decades.

Here are some other recent publications that may interest PERFECT members:

Changing beliefs about past public events with believable and unbelievable doctored photographs.

On the persuadability of memory: Is changing people’s memories no more than changing their minds?