Justice and the Meritocratic State

This post is by Thomas Mulligan, a faculty fellow at the Georgetown Institute for the Study of Markets and Ethics. He talks about his new book, Justice and the Meritocratic State. 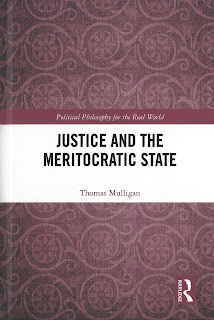 A striking feature of the philosophical debate about justice is that our most popular theories are rejected by the people who would have to live under them.  Since the 1970s, libertarianism and egalitarianism have dominated political philosophy despite being unpalatable to the public; we know, for example, that “empirical studies provide almost no support for egalitarianism, understood as equality of outcomes, or for Rawls’s difference principle” (Konow 2003: 1199).

The goal of this book is to provide a theory of justice that is consonant with human intuition and more conceptually compelling than these competitors on the right and the left. Although you wouldn’t know it from our politics, there is deep normative agreement about the structure of a just economy.  Human beings across lines of gender, race, class, and culture believe that people should get their just deserts.  This is why, for example, if you pay a person less than she thinks she deserves, or more than she thinks she deserves, she is unsatisfied with her compensation.

That justice is desert has been verified by decades of research in experimental economics, social psychology, neurology, evolutionary history, and other fields.  Rather than reject that consensus, as most philosophers would, I argue that we should embrace it, and agree that “the concepts of moral desert and justice are deeply connected, and one needs the other for a proper definition” (Rustichini and Vostroknutov 2014).

The theory of justice I advance is monistic (justice is desert and nothing else), deontological, and leads to a society that is “meritocratic” in character.  The theory rests on three principles. Principle one: Equal opportunity.  We normally want to say that the fastest runner deserves the medal on the basis of his merit.

But this is no longer true if the other runners were hobbled before the starting gun went off.  In that case, the winner’s claim to deserve the medal is weakened, if not nullified.  As it goes for races, so too for our economy.  Justice requires that we provide robust public education, healthcare, and other forms of social support to children born into disadvantage, and that no one has a head start owing to inheritance or nepotism.

The meritocrat takes this idea to its inevitable end: It is unjust to discriminate on the basis of any factor irrelevant from the point-of-view of merit.  One’s connections, appearance, religion, sexual tastes, etc. cannot justly be used in employment decisions.

Principle three: Compensation based on contribution.  On the meritocratic account, a person deserves income on the basis of his meritorious contributions to the economy.  Our economy is unjust not because it is unequal, but because so many of those who have so much don’t deserve their wealth.

Over the course of the book, I show that an economy obeying these principles would be highly efficient.  I conclude by discussing meritocratic public policies: a high top marginal income tax rate which wards off rent extraction; an end to affirmation action; and major new social programs to establish equal opportunity.