A workshop, entitled “Exploring Culture and Experience: choosing methodologies in qualitative research”, took place at Aston University on the 26th of April 2018. This brief report is written by two of the organisers, William Day (graduate teaching assistant/PhD student in Psychology at Aston) and Tiago Moutela (research assistant/PhD student at Aston). Most of the talks were recorded, and are linked to at the end this write-up.

This workshop was organised by members of the interdisciplinary, interuniversity, group Phenomenology of Health and Relationships (PHaR). PHaR meets bi-monthly at Aston University to read, discuss and share insights into any work which brings a phenomenological focus to the study of health and illness. We are especially interested in understanding the relational context of health and illness, and what we might call a 'health relationship.' Together, some members of PHaR successfully submitted an application to a workshop fund ran by the Psychology Postgraduate Affairs Group (PsyPAG).

We had hoped that the rather ‘broad’ scope of the workshop’s focus would enable both the speakers and workshop attendees the freedom and space to talk about their own research, and research interests; whilst exploring the possibilities offered by new and ‘innovative’ ways of collecting and presenting data. Although rooted in psychology, we intended to continue the interdisciplinary ethos of PHaR. As such, delegates from a variety of backgrounds attended including optometry, philosophy and the local police force.

Opening the day, in a talk titled “foregrounding context in qualitative research”, Dr Michael Larkin (Aston University) drew upon a wealth of examples (his son’s spatial explorations of a car being the, perhaps, most memorable) to explain how and why context in qualitative research is the topic of interest rather than a ‘thing’ to be excluded and controlled for. Instead, we should think creatively about how to access the relationship between an individual and their world; how different types of data can bring the different aspects of these relationships to the foreground. 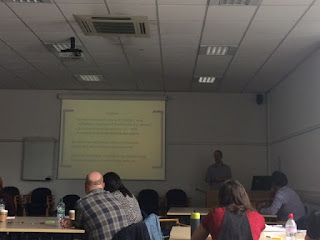 The second talk of the day was by Dr Sarah Seymour-Smith (Nottingham Trent University): “a synthetic discursive approach: research towards the co-production of a prostate cancer mobile application for African Caribbean men”. Speaking candidly about her experiences of data collection, Sarah explored the affect of her status as an ‘outsider’ within a community involved project. Of particular interest were issues experienced around dissemination, where participants actively wanted to be named and credited for their involvement in the project, and responses to perceived positioning (concerns that African Caribbean men were understood as being “homophobic”).

Before lunch we embraced some disciplinary clichés and handed out post-it notes. Attendees were encouraged to briefly write about methodological issues they would like to discuss, before sticking the post-it notes to adjacent walls and finding likeminded individuals. Despite some passing logistical mysteries, the exercise worked well as an ‘ice breaker’: described by one of the delegates as “an academic speed dating event”.

Lunch was accompanied by a series of artworks, loaned to the event by Katie Melvin (doctoral researcher, University of Leicester). Katie’s research interests primarily surround the relationships between bodies, and social and material circumstances. Her artwork serves both a tool to share ideas, but to also explore her own academic inspirations.

We were also fortunate to have posters from Rebecca Clarke (Aston PhD student) and Harpreet Sihre (doctoral researcher, University of Birmingham) Rebecca’s work used interview and a thematic framework method to explore the views and experiences of paediatric healthcare professionals concerning weight management advice and support offered to children living with asthma. Harpreet’s prospective research seeks to understand the lived experiences of severe postnatal psychiatric illnesses in English speaking South Asian women, living in the UK. The responsibility of choosing a winner fell to our speakers and Harpreet’s poster emerged as first choice. 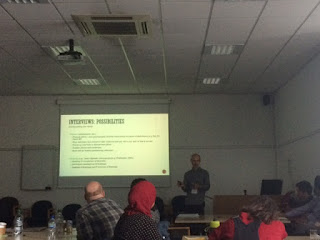 Beginning with the potentially controversial point of seeing interviews analysed with some sort of thematic analysis as now banal and tedious, Professor Brendan Gough (Leeds Beckett University) ensured there would be no ‘post-lunch slump’ in attention. Brendan argued that given the ubiquity of the internet and the integration of our daily lives with social media, we, as researchers, should “go where the action is”. Why should we assume data needs to be collected in the same old ways? Looking at his work around men and infertility, Brendan demonstrated how online content (from message boards) can be integrated as creative and innovative data.

The day’s final talk from Dr Jo Brooks (University of Manchester) looked at the use of visual methods in qualitative psychology research. Focussing on the generation of visual materials as part of the interview setting, Jo showed how the Pictor technique can be an effective way to encourage reflection on relational interactions; possibly particularly salient in healthcare settings. 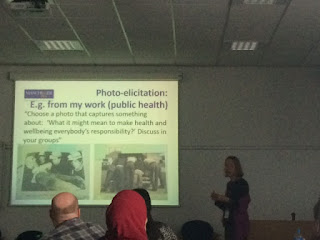 The final session of the day asked workshop attendees to reflect on their day; to think about how they may wish to include the ideas seen and talked about within their own work. What would be enriching? What methods might not add value?

Reflecting on our own experiences, as organisers, we look back on the day as a ‘success’. The feedback received suggests that we achieved what we had set out to: creating an environment in which thought-provoking, diverse topics were presented, alongside plenty of opportunity for group discussions. We would like to particularly thank Michael, Sarah, Brendan and Jo for their significant contributions to the day as well as PsyPAG for the funding the day.

We would also like to thank our fellow organiser Kristina Newman (PhD student, Aston University); PsyPAG sponsor Claire Melia (Keele University); Katie Melvin for sharing her wonderful art; Rebecca Clark and Harpreet Sihre for their posters; our undergraduate student helpers Yahya Adnan and Esra Yeter; everyone who attended; and our supervisors Dr Rachel Shaw and Dr Michael Larkin for their continued event organising advice and support.

Below are links for recordings (audio and slides only) of the talks and some further information: