The Bodily Self: Selected Essays

This post is by José Luis Bermúdez, who is Professor of Philosophy at Texas A&M University. His books include The Paradox of Self-Consciousness (MIT Press, 1998), Thinking without Words (OUP, 2003), Rationality and Decision Theory (OUP, 2009), and Understanding “I”: Language and Thought (OUP, 2017).

His current projects include the third edition of his textbook Cognitive Science: An Introduction to the Science of the Mind (CUP); and The Power of Frames: New Tools for Rational Thought (to be published by CUP), supported by a fellowship by the American Association of Learned Societies for the 2018-2019 academic year and a National Endowment for the Humanities Summer Stipend for 2018. In this post he presents his new book: The Bodily Self. 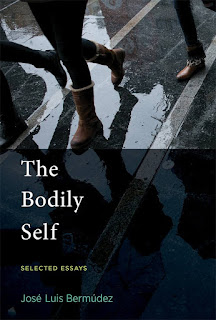 The Bodily Self contains a selection of essays on self-consciousness and bodily awareness written over the two decades since The Paradox of Self-Consciousness came out in 1998. All of the papers have been revised, some extensively so, and one appears here for the first time. The Introduction draws out the principal themes running through the volume, and an Afterword points to new directions.

For many philosophers, self-consciousness is closely tied to language. Think of Kant, for example, and “the ‘I think’ that accompanies all my representations”. For Kant, to be conscious of oneself is to be capable of thinking about oneself in a special way. Kant, like many others, took that special way of thinking of oneself to be coeval with the ability to refer to oneself using the first person pronoun “I” (or its equivalent in other languages).


There are many fascinating and important connections between self-conscious thought and linguistic self-reference. I explore some of them in my recent book Understanding “I”: Language and Thought (2017). However, they are not the focus of the essays in this volume. In one form or another, all the essays collected here explore a single basic idea. This is that the rich and sophisticated forms of self-consciousness with which we are most familiar (not just as philosophers or psychologists, but also as ordinary, reflective, individuals) rest and depend upon a complex underpinning that has largely been invisible to students of the self and of self-consciousness.

The essays in this volume focus on three primitive forms of self-consciousness in particular:

The object of these forms of self-awareness is primarily the embodied self. Hence the title: The Bodily Self.