Today's post is by Francesco Filippi (pictured below), an Italian director, screenwriter, and animator whose work can be found here. In this post he tells us about his new film, Red Hands, which addresses the theme of domestic violence. 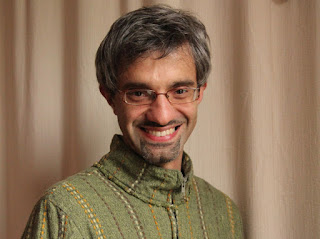 Can an animated film for teenagers have something to say to the readers of this very interesting blog which explores the boundaries of the human mind? Red Hands, an Italian 30' long film in stop-motion and 2D animation, had his premiere at the Rome Film Festival on October 20th, 2018.

As you can see from the trailer above, it's a story of domestic abuse. Ernesto, a 12 year-old boy, discovers that the magnificent red graffiti appeared on the walls of his street are made by Luna, a girl with a mysterious power. She can emit a blood-like liquid from her hands, but her power is a side-effect of her father's violence at home. 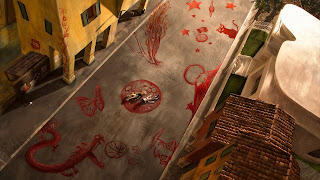 There are several themes developed in the film: how violence can be sublimated into art; how our imagination can help reshape our life and become adults; how we can share ideas, dreams, fears, and hopes with somebody. It's not just a matter of talking to one another or doing things together. What happens when two souls meet? What do they do? What is the place of love? 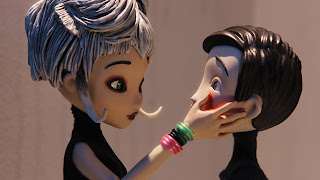 Furthermore, it's known that our experience of life is filtered by our perception and that about 90% of our mental activity is subconscious. Pierpaolo Pasolini reminds us that cinema exists in nature every time we close our eyes and dream. Despite all this, dreams are considered dangerous to use in films, because audiences know that they are dreams and do not affect reality. As they don't push the story forward, you have to cut them out. The challenge I had as an author was to explore the souls of the two young protagonists pushing the story forward and capturing the audience's attention.

I decided to proceed this way: the stop-motion set and puppets, with their three-dimensional reality, texture and details (imperfections included) would express the objective reality. Then art director Mauro Dal Bo would add digital strokes on every shot to enrich the whole image and give it a more 2D painting feeling. 2D brush strokes express the subjectivity of the characters and in every shot the final look is a mixture of objectivity (3D) and subjectivity (2D), reality and perception.

Some slow-motion and freeze-frame enhance these 2D strokes to better express the emotion of a specific moment in Ernesto's conscious experience. Then there are pure 2D sequences and these are Ernesto's dreams: this subconscious dimension takes 30% of the film. Ernesto's dreams explore hopes and fears about his relationship with Luna.

Simply put, I wanted to explore the truth of the characters. At the end of the day, if something happens in the head of a character, is it real or not? Is it part of the story? Does it matter? Do we need matter to say that something matters? The reactions to the film at the premiere let me think that it is possible to explore the subconscious of the characters without boring its audience.

I hope you'll have the chance to watch the film and any comments from you all will be welcome and useful. Information about the film's participation in other festivals and releases can be found on Red Hands Facebook page!