Luca Malatesti and Filip Čeč collaborated on the project Classification and explanations of antisocial personality disorder and moral and legal responsibility in the context of the Croatian mental health and care law (CEASCRO), funded by the Croatian Science Foundation (Grant HRZZ-IP-2013-11-8071).

Both are based in the Department of Philosophy of the Faculty of Humanities and Social Sciences in Rijeka (Croatia). Luca is associate professor of philosophy and works mainly in philosophy of mind and philosophy of psychiatry. Filip is assistant professor of philosophy and his interests include the metaphysical problem of free will and moral responsibility, and the history of psychiatry. In this post Luca and Filip summarize their chapter "Psychopathy, Identification and Mental Time Travel", that is contained in the collection edited by Filip Grgić and Davor Pećnjak, Free Will & Action. 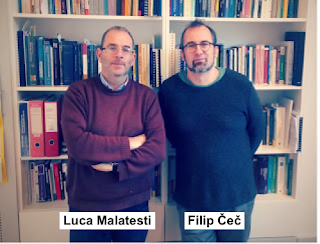 Psychopaths are characterised by a callous, manipulative and remorseless behaviour and personality. In recent years, scientific research on psychopathic offenders, but also on the so-called successful psychopaths, who do not necessarily offend, has increased considerably. Robert Hare’s Psychopathic Checklist Revisited (PCL-R) is a diagnostic tool that has played an important unifying role in this research (Hare 2003).

The issue of the legal and moral responsibility of persons classified as having psychopathy has attracted philosophical attention (Kiehl and Sinnott-Armstrong 2013; Malatesti and McMillan 2010). Some have maintained that the capacity for mental time travel might be relevant for moral responsibility and that psychopaths lack these capacities (Kennett and Matthews 2009; Levy 2014; Vierra 2016). In relation to the past, mental time travel is the capacity to have memories of past episodes in which the agent was personally involved. In relation to the future, mental time travel involves prospection, the capacity to imagine future situations where the agent might be involved.

In this chapter, we offer a novel argument to support, in a restricted and tentative form, the thesis that psychopathic offenders have impairments that might affect their mental time travel and, thus, their moral responsibility. We argue that certain studies on the instrumental learning in psychopathic offenders show that, in certain specific situations, these subjects might be impaired in capacities that we argue are prerequisites for the capacities relevant for mental time travel and that are relevant for the ascription of moral responsibility.

Following Harry Frankfurt (Frankfurt 1988), we maintain that moral responsibility requires a capacity to identify with certain desires or other motivational mental states. In our view, this process of identification involves accepting desires in virtue of an evaluation that is sensitive to commitments that stem from previously formed mental states. Consider, for instance, the case of a person who, despite its occurrent desire to drink a glass of wine, refrains from doing that, given a previous commitment to be abstemious. Therefore, in this sense, identification relies on some basic capacities for mental time travel. Moreover, we argue that a process of “detachment” from current operative desires or other motivational states is of central importance in the process of identification. This process, in fact, enables the type of stance towards a motivational mental state that is necessary for the identification with (or rejection of) it.

There are several studies on the psychopaths’ poor behavioural control in instrumental learning tasks (see Blair 2013; Jurjako and Malatesti 2016; Koenigs and Newman 2013; Maibom 2005). This type of learning consists in the formation of an association of triggering stimuli, the subject’s response and rewarding or punishing stimulus.

As an instructive example, we can consider here the performance of psychopaths in the so-called Iowa gambling task (Bechara et al. 1994; Blair et al. 2001; Mitchell et al. 2002). Participants, whose aim is to earn as much money as possible, incur monetary rewards or losses depending from which deck of cards they choose a card. The decks differ from each other in the number of trials over which the losses are distributed. Choosing a card from a certain deck will lead to losses in the long run; choosing a card from others will lead to gains. Psychopathic participants, as compared to controls, show risk-prone behaviour in selecting the decks throughout the task. Accordingly, they sustain major losses

We think that there are reasons for concluding that these experiments show that psychopaths, in certain circumstances, are incapable (or less capable than controls) to detect relevant information (Jurjako and Malatesti 2016). We think, furthermore, that this determine a lack of “detachment” from certain current operative motivational states. Therefore, these states cannot enter the right connection with commitments stemming from past mental states and anticipations of these subjects. We take that these deficits affect the capacity for mental time travel, an incapacity that might be significative for the ascription of moral responsibility.

It is important to stress that we cannot conclude that the available evidence on instrumental learning in psychopaths proves that they suffer a global incapacity in relating certain operating motivational states, as those that guide their performance in the tasks at issue, to their desires and other motivational states (see Jurjako and Malatesti 2017). Empirical findings appear to show that the quality of the performance of psychopaths varies between tasks in which the tested subjects are aware that they must adopt their responses to the cues they encounter, if they want to succeed in their goal, and those tasks in which the tested subjects, if they want to succeed, are not aware that they have to follow certain cues (Brazil et al. 2013; Koenigs and Newman 2013 Maes and Brazil 2013).
Posted by Sophie Stammers at 08:00