Today's post is by Natalie Ashton (University of Stirling). She is reporting on a workshop held at the University of Warwick on 19th of September as part of the AHRC-project Norms for the New Public Sphere. It was the first of a series of workshops planned to take place over the next two years. These workshops are designed to bring together academic philosophers with media scholars, professionals, and activists in order to investigate the opportunities and challenges that new social media pose for the public sphere. This first workshop focused on the epistemic norms that can foster a public sphere in which democracy can flourish. 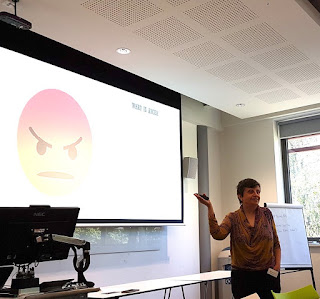 Alessandra Tanesini kicked the event off with a talk titled “Bellicose Debates: Arrogant and Liberatory Anger On and Off-line”. Her main claims were that anger can be divided into different kinds: status anger, which is typically arrogant, and liberatory anger, which she says can offer distinctive motivational, epistemic and communicative benefits in the fight against oppression. She also argued that some calls for civility in online debates are complicit in claimant injustice, when liberatory anger is muted because it is mis-interpreted as mere ranting or venting.

The next two talks had a common theme: both cautioned against the misuse of inaccurate terms for problematic online phenomena on the grounds that this can disguise their pernicious effects. In her talk “Echo Chambers, Fake News, and Social Epistemology” Jennifer Lackey argued that the problem with Trump’s reliance on Fox news is not, as is often claimed, that it allows him to exist in an echo chamber. In fact, Lackey argues, echo chambers can be a good thing. Rather, Trump’s problem is that his favourite TV channel reports fake news (or lies) and that this is amplified online by fake news approvers (or bots). Lackey went on to make a distinction between criticising the structure of epistemic environments, and their content, and argued that social epistemologists should be less afraid of making the second kind of criticism.

Quassim Cassam’s talk “Post-Truth, Lies, and Strategic Bullshit” involved a similar warning against describing recent, problematic political assertions as mere bullshit. Cassam evaluated three existing conceptions of bullshit, then offered his own epistemic conception on which a bullshitter is someone who asserts that P despite being knowingly ignorant of whether P. He then considered three real-world claims as test cases: “We [the UK] send £350 million a week to the EU” (made by the Vote Leave campaign in the run up to the 2016 Brexit referendum); “Turkey (population 76 million) is joining the EU” (also from the vote leave campaign); and Trump’s claim that he “watched in Jersey City, New Jersey, where thousands and thousands of people were cheering as [the World Trade Centre] was coming down”. Cassam, argued that none of these claims fit the definition of bullshit, Instead, he said that they are better understood as misuse of statistics, propaganda, and hate speech, and that failing to call them this risks trivialising them and the harms they create.

In a paper called “Deference and Democratic Citizenship” Alex Worsnip suggested that the new public sphere is currently governed by the norm of full opinionation - according to which one ought to have an opinion (and preferably an autonomously formed one) on every pressing political or social issue - but that a preferable norm might be one of abdication - according to which one defers to expert consensus if one can be identified, and suspends judgement if one cannot. He then raised the concern that this norm would be in tension with democratic ideals, but argued that the most plausible version of this worry doesn’t arise as long as the abdication norm only applies to descriptive, rather than normative, questions. 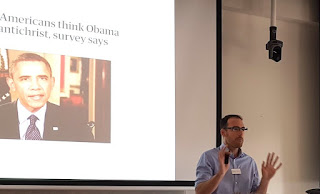 Finally, Michael Hannon closed the workshop with a talk entitled “Political Disagreement or Partisan Bad-mouthing?”. He drew attention to various survey results which support the idea that opposing parties don’t agree on facts anymore than they agree on values, such as one survey which found that democrats and republicans give different answers to questions about which of two pictures (one of Trump’s inauguration and one of Obama’s) contains more people. But argued that the extent and depth of political disagreement is overstated - many political disagreements are illusory, as the claims people made are not expressions of belief, but rather ways for people to ‘cheer’ for their own political ‘team’ or ‘badmouth’ their political rivals.

Our next epistemology event is planned for September 2020. Before then we will have our first events on self-government and the new public sphere (in December 2019) and on privacy and the new public sphere (in April 2020). Further information will be available on the events page of our website soon. If you’d like to join our mailing list (or if you have any other questions) then please contact me.