In this post I reflect on what the Disney film Frozen can tell us about youth mental health. (This is a slightly expanded version of a post that appeared on the University of Birmingham website on 16th December 2019.)

When it was released in 2013, Frozen was praised for having a leading female character who was different: a guest at Elsa’s coronation calls her a monster when she loses control; Elsa isolates herself from the people she loves for fear of harming them; and she is distressed because she does not fully comprehend what is happening to her. Elsa does not ‘fit in’, and often makes those around her feel uncomfortable. 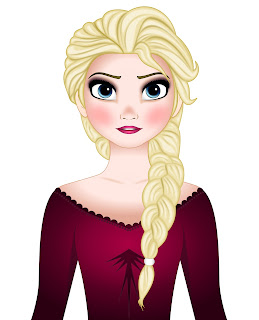 When Elsa celebrates her liberation from her stuffy conventional life with the song “Let it go”, some critics talked about Disney’s ‘gay agenda’ and Elsa was welcomed in some circles as a queer icon. Some were hoping that she would get a girlfriend in Frozen II. But there is another form of diversity that Elsa embodies just as convincingly, that of a young person who struggles with her mental health, attempts and fails to suppress those unusual experiences that make her different, and is (at first) neither fully understood nor supported by her immediate social circle.

At the end of the original Frozen film, the renewed love and understanding of her sister come to the rescue, and Elsa learns to control her 'power'. She agrees to play her role as queen, even showing that her quirkiness can have some unexpected benefits. However, the last scene where she turns the palace courtyard into an ice-rink leaves several questions hanging in the air. Now knowing that she is different, will her people trust her not to disrupt their ordinary lives again? Will she be able to adjust to a life that never felt like her own just because she is allowed to play with a little ice?

Those are the questions to be answered in the sequel. If the mental health angle might have been dismissed in Frozen as reading too much into the character (but see this and this), Frozen II confirms that Elsa has experiences that other people do not share and do not understand. Indeed, the whole premise of the film is that Elsa hears voices, not just any voice, but a voice that makes her doubt the nature of the reality she is supposed to accept and invites her to distance herself once again from a normality that she never found authentic.

In the course of the film, Olaf and Anna keep referring to Elsa as someone who may lose credibility or need protection because of her difference, and as someone who takes unnecessary risks and is bound to lose control in critical situations. Elsa appears frustrated as she appreciates the concerns of her sister and friends, but does not want to be sensible—or she does not know how. In the end, Elsa’s difference is openly acknowledged, and as a result ‘normality’ is no longer imposed on her. She remains an outsider, one who has learnt to tame her demons by embracing her difference.

Young people who struggle with their mental health may not meet Hollywood beauty standards as Elsa does, enjoy the privileges of a queen’s wealth, or have crowd-pleasing superpowers such as the capacity to make stunning ice sculptures on a whim. Reality is still a world away from a Disney fairy tale. However, it is refreshing to see that a Christmas blockbuster for children invites us to reflect on how having unusual experiences can affect young people’s lives and the lives of those around them, for better or worse.

In particular, the film addresses some key issues that we investigated as part of project PERFECT: the importance of supportive personal relationships for the capacity that young people have to manage difficult situations; and the risks of self-doubt and self-stigma, when young people come to think of themselves as unreliable or dangerous due to the influence of society’s prejudices, because they see themselves through the eyes of others. We cannot change popular culture overnight, but creating opportunities to talk and think about the effects of unusual experiences is important, and Frozen II is a good conversation starter.