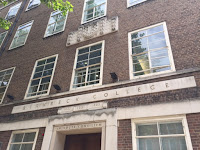 This post is by Anneli Jefferson, Research Fellow at the University of Birmingham, working on the Costs and Benefits of Optimism project.

On June 27th, Nils Kürbis and Dan Adams hosted a workshop on falsity entitled 'Falsity – Not just Truth’s Poor Relation' at Birkbeck (see picture of venue above). The lively workshop approached falsity in a number of thought-provoking ways.

Those of us who don’t work in metaphysics take the concept of falsity for granted. But once you start thinking about what falsity is, numerous puzzles arise. If you assert that something is false, in other words, it is not the case, what makes that claim true?

When we speak truly, we say how things are. If we speak falsely, things aren’t how we say they are. But doesn’t that mean that what we say is there is not there at all? So what are we talking about? It seems as if we are talking about nothing at all, so how can what we said even make sense? One response to this problem is that there are negative facts. But that’s puzzling too. A negative fact records the absence of a fact. But if there are negative facts, doesn’t that mean that absences exist? And if absences exist, shouldn’t they be presences, rather than absences?

In her talk, MM McCabe addressed arguments by the sophists in Plato’s Euthydemos. The sophists claim that they can teach anyone anything: precisely because there is a problem about believing false propositions, as there is nothing that could correspond to a false proposition, there is nothing to believe. So all our beliefs must be true, if meaningful, and disagreement is impossible. MM showed how the account Socrates puts forward in the dialogue allows for falsity and a normative conception of speaking and saying. Only by getting things wrong and being able to communicate about mistakes does learning become possible.

I asked about the role of falsity in positive illusions and optimistically biased beliefs. Are these biased beliefs about ourselves and our future actually false and do such false beliefs serve a purpose? As it turns out, whether positive illusions are false or not is frequently not a straightforward matter. A number of methodological, epistemological and even metaphysical problems arise when we try to assess whether a particularly rose-tinted belief is in fact false.

One familiar problem from the psychological literature is establishing which individuals have false, overly positive beliefs about themselves. Taking the example of the optimism bias: If our seemingly overly optimistic prediction came true, surely our belief was not false? We can maintain that these optimistically biased beliefs were false even when the event does end up occurring ,if we say that individuals err in their estimate of the likelihood of a positive event occurring. Needless to say, establishing the actual likelihood of an event occurring is a further challenge.

In discussing the question whether positive illusions have a purpose, I distinguished between a notion of purpose as a function specified by evolutionary theory and one which claims that positive illusions are good for us in some normative sense. I highlighted some examples of positive illusions where it is plausible that the false belief itself was evolutionarily beneficial but concluded that it was unclear whether unrealistically optimistic beliefs about the future have historically been beneficial to survival and reproduction.

I argued that positive illusions are good for us when the positive effect they have on emotional well-being and outlook is not outweighed by the harms that can arise, both in terms of misguided action and as regards our ability to have a coherent, shared view of the world and ourselves. Lisa Bortolotti and I will be exploring these and other issues concerning unrealistic optimism further in our project on the optimism bias which started on the 1st September.

All talks received rigorous but sympathetic scrutiny both by a commentator and by the audience. Thanks to Nils and Dan for organizing an excellent workshop.