The Mind, Value and Mental Health International Conference in Philosophy and Psychiatry took place on 25 July 2015 at the picturesque St. Hilda’s College at the University of Oxford. It attracted philosophers, psychiatrists and psychologists both from the UK and from abroad. Below I summarise four of the papers presented on that immensely fascinating day.

The first talk was given by Rachel Cooper, Lancaster University (pictured below with Matthew Parrott) and was entitled ‘DSM-5: Stasis and Change’. Cooper argued that classifications like the DSM can be thought of as forming part of the infrastructure of science, and have much in common with material infrastructure. The implications are, Cooper suggested, are that as with material technologies it becomes possible for ‘path dependent’ development to cause a sub-optimal classification to get ‘locked in’ and hard to replace. Cooper argued that the DSM has become locked-in and as a consequence any changes to the diagnostic criteria have become very difficult. 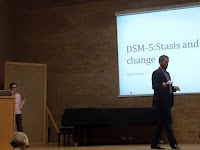 The next paper was given by Gerrit Glas, (VU University, Netherlands) and was entitled ‘Psychopathology and Self-Relatedness: Conceptual Issues’. Glas defended the view that psychiatry needs a clinical conception of psychopathology, alongside scientific conceptions. Clinical conception, Glas argued, is both self-related and context-oriented. Glas introduced the notion of self-refentiality and explained how it can help to understand and make sense of the layers of clinical manifestations of mental illness.

In her talk ‘A framework for understanding epistemic authority in counselling contexts’ Catherine Rickus (Marquette University, USA) argued that in a therapeutic situation the recognition of one’s own emotions might not always be correct. For example, one may not give themselves permission to feel nervous in a certain situation, therefore they may not recognise they are nervous. In those situations, a third person’s (therapist’s) view might be more accurate. Rickus pointed at the importance of collaborative work between a patient and a therapist in order to draw possibly most accurate conclusions.


The last paper was presented by Owen Flanagan (Duke University, USA) (pictured below) with a catching title ‘Willing Addicts? Drinkers, Dandies, Druggies and other Dionysians’. Flanagan asked whether addiction may be seen, in many cases, as a choice rather than an ‘unwilling’ illness. He introduced a notion of ‘willing addicts’ to describe people who rationally choose addiction (either to become one or once becoming one, to stay one). A willing addict prefers, all things considered, to remain an addict. By providing real-life examples coming from recent autobiographical works, Flanagan argued that the phenomenon of willing addiction is possible and indeed actual. 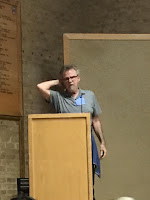 As a part of the Conference programme, there was an opportunity to attend the launch of ‘The Oxford Handbook of Psychiatric Ethics’ (Oxford University Press, 2015) (picture below). The impressive volume contains many interesting chapters related to the field, with one on rationality and patient autonomy authored by Lisa Bortolotti and Jill Craigie. 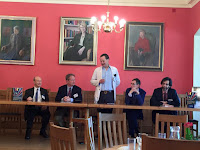 The Mind, Value and Mental Health Conference was a valuable experience. It enabled an interdisciplinary discussion on current conceptual issues in philosophy of psychiatry as well as offering a chance for valuable networking.