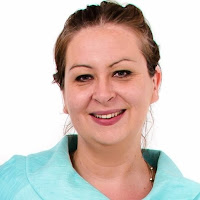 In this post PhD student Magdalena Antrobus (pictured above) summarises her recent research for Project PERFECT concerning the phenomenon known in the empirical literature as ‘depressive realism’.

Depressive realism is the thesis that people with depression make more realistic inferences than ‘healthy’ individuals (Alloy and Abramson 1988). The term refers to the phenomenon discovered in 1979 in a series of experiments designed around assessing the judgement of contingency tasks (Alloy and Abramson 1979). The assessments of control made by participants with symptoms of depression were more accurate than those made by ‘healthy’ individuals. The difference between the two groups was statistically significant, making the results conclusive. People with depressive symptoms judged their control over uncontrollable events correctly, whilst the judgements made by individuals without depressive symptoms have been shown to exhibit a positive cognitive bias.

Could people who experience depressive symptoms really be closer to the truth in their beliefs than ‘healthy’ individuals? This question seems to be of vital importance for clinical research. To find the right answer could mean a better understanding of the nature of depression-associated cognitive processes and of elements of depressive aetiology, and, most importantly, could lead to new, more effective therapies. A thorough analysis of empirical research dedicated to investigate the phenomenon of depressive realism shows that depressive mood (but not more severe symptoms of depression) might be related to more accurate judgments. This poses the question of whether there might be a certain level of ‘feeling low’ which would still be beneficial for the subject who aspires to acquire accurate beliefs. If that level is exceeded, ‘feeling low’ produces negative bias, leading to a distorted perception of reality.


Furthermore it seems that the impact of depressive realistic judgements is strongest in estimations related to the self rather than judgements about other people or about situations with no emotional links to the subject. People with depressive mood are more accurate than controls whilst estimating self-control over certain outcomes (for example, Msetfi et al. 2005), when recalling their own performance in a variety of tasks (for example, Dennard and Hokanson 1986), when estimating the probability of events, which might happen in their personal life (Korn et al. 2014), or – whilst expressing subjective feelings of being misunderstood by their family members (Gordon et al. 2013). Depressive realism seems to be less significant or completely absent in the situations of estimating neutral, non self-related circumstances, predicting future random events or producing a judgement after time delay. People also do not produce accurate judgements when suffering from severe forms of depression - instead they are prone to negative perceptual bias.

Can we say that the symptoms of depression might constitute a source of epistemic benefits? I believe so, although ‘sadder’ will not necessarily be ‘wiser’ in every meaning of this word and not in randomly picked situations. However, a ‘sadder’ person might be wiser than a ‘happier’ one in a limited number of circumstances. When comparing the above conclusions with data related to the phenomenon of ‘unrealistic optimism’, the results are even more intriguing and have been discussed in our recent paper (Bortolotti and Antrobus 2015), published in Current Opinion in Psychiatry.

As a part of my work for Project PERFECT I have had some wonderful opportunities to present my work on depressive realism at several conferences, including The British Society for the Philosophy of Science Annual Conference in Manchester, The Cognitive Futures Conference in Oxford and – upcoming – The International Conference on Philosophy, Psychiatry and Psychology in Chile. My work has also been presented in the form of a research poster (see picture below) and awarded the Peer Award for the Best Poster at the University of Birmingham Graduate Research Conference. 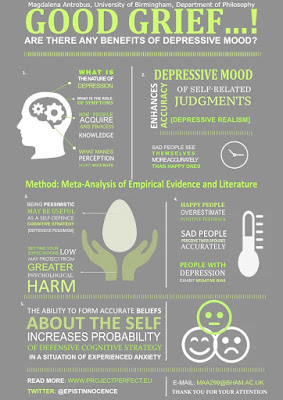 This academic year I am looking forward to continuing my work on possible benefits of depressive cognitions as a part of the PERFECT team and to sharing my research with a wider audience.
Posted by Magdalena Antrobus at 08:00