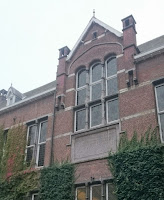 In the first talk, Ignaas Devish stressed the distinction between suffering and pain, claiming that suffering is not a phenomenon that is amenable to diagnostic operationalisation and medicalization. He argued that because of this, victims of traumatic events should be offered an ethical debriefing in addition to psychological debriefing, which allows them focus on their suffering and the existential problems they face from a non-medical perspective.

Arantza Exteberria talked about ‘Interactive Bioloops and Pathology’. She pointed out  that biolooping is a common phenomenon, with social levels thoroughly influencing biological levels of functioning. Because of this, there is no clear mental/physical distinction when it comes to pathologies. Furthermore, the complex and dynamic nature of individual-organism relations suggests that personalized medicine will be a fruitful way to proceed.

Denny Borsboom introduced the audience to the network approach to mental disorders. Rather than searching for a unified cause that underlies a variety of pathological symptoms in a certain disorder, this model focuses on the network of pathological symptoms as a mutually reinforcing structure. On this model, high connectivity between the different network nodes or symptoms is the hallmark of a disordered mind. Denny concluded that according to this understanding of mental disorder, a disorder as an entity is more analogous to a flock of birds than to a unitary thing.

In his presentation ‘Fat or Obese – What Difference Does it Make?’ Andreas de Block considered objections to the medicalization of fatness by proponents of fat studies. He criticized the link fat studies scholars often make between pathologizing and moralizing and discussed studies which show some potential benefits of pathologizing obesity. Andreas also explored the possible effects of labelling obesity as a mental disorder analogous to addiction.


Carl Craver talked about mechanisms and psychiatric disorders. He defended the claim that identifying mechanisms is an essential part of understanding mental disorders. He stressed that mechanisms can be found at different levels, need not be purely biological and that a focus on mechanisms does not preclude looking at the interaction between individual and society. He then cautioned that we should however not expect mechanistic explanation to provide taxonomic distinctions between different disorders.
Daniel Hartner and Kari Theurer’s talk addressed the 2013 Research Domain Criteria project’s attempt to improve diagnostics in psychiatry by focusing on functional domains rather than on clusters of symptoms. They warned that this framework neglects the normative aspect of the ascription of disorder by focusing on seemingly objective mechanisms and domains of functioning.

In her talk ‘Three Puzzles in the Logic of Psychiatric Classification’ Rachel Cooper considered 3 related questions: What are basic units that are classified in psychiatry, people or disorders? How should disorders be individuated? How can we distinguish between person and illness? She tentatively concluded that different answers might be more or less plausible for different kinds of mental disorders. Personality disorders or autism for example are disorders that don’t seem to lend themselves to an approach where the disorder can be abstracted away from the person, because they are such an integral part of who the person is and what they are like.

Markus Pawelzik attacked both the notion of a mental disorder and the idea that mental disorders can be naturalized. He stressed that while there is mental illness, the mental problems people suffer from are to diverse to be classified into disorder categories and that there are no disorder specific biological signatures which would allow the biologization of mental disorders.

This was an enjoyable and productive workshop which benefited from incorporating a large range of perspectives on the topic.
Posted by Anneli at 08:00