The Early Career Mind Network (ECMN) is a new initiative with the aim to establish a strong network of early career researchers in the philosophy of mind who do not yet have permanent positions in academic philosophy. On 27th to 28th April 2016 the University of Warwick hosted the first ECMN research forum, organised by Alisa Mandrigin. This blog post provides an overview of the research ideas explored by the researchers at the event.

Tom McClelland spoke first on the Grand Illusion Hypothesis (GIH). According to the GIH, we overestimate how rich visual experience is outside of focal attention. McClelland described empirical findings showing that our visual systems compensate for the limits of attention by encoding information about the average features of groups or crowds. McClelland outlined precisely how findings relating to this ‘ensemble perception’ should be viewed as important to the GIH. He denied that the findings show that there is no Grand Illusion, but argued that they do suggest that visual phenomenology is less diminished than the GIH might seem to suggest because our experience of things outside focal attention can be aided by ‘ensemble perception’. 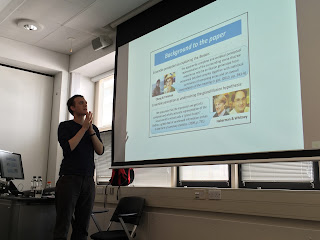 Next Vivan Joseph asked how we should address the question of whether we can attend to an object while remaining unaware of it. He presented reasons for rejecting approaches to the question that involve a significant departure from the folk conception of attention. He argued, for example, that philosophers who discuss experimental data about blindsight (the ability to respond to visual stimuli without being conscious of it) when trying to answer whether we can attend to an object without being aware of it beg the question against those, such as William James, who argue that attention is the concentration of consciousness. 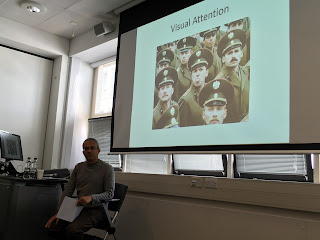 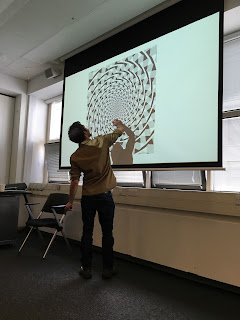 Joe Cunningham discussed the highest common factor (HCF) conception of rationalising explanation, according to which the explanation of one’s action in good cases, in which one acts in response to a fact in favour of one doing something, is in some significant sense the same as the explanation of one’s actions in bad cases, in which it only seems as if one is responding to a normatively significant fact. Cunningham argued that HCF can be interpreted in two ways. On the strong reading, the particular explanation in the good case is the same as that in the bad. On the weak reading, the same kind of explanation is appropriate in the good and bad case. He claimed that recent arguments developed by Hornsby (2008) and Roessler (2014) only succeed in undermining the strong version of the view. He then sketched a fresh argument effective against even the weak version of the view which appeals to certain claims about how good cases contrast with cases of weakness of will. 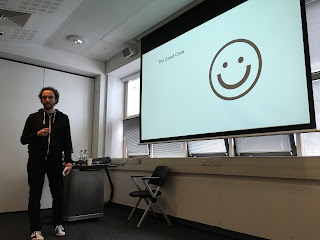 Barney Walker argued that philosophers writing about the value of knowledge have tacitly assumed that the way to answer the question of why we desire knowledge is to appeal to the claim that knowledge is better for a subject than mere true belief. He then focused on Williams’ claim that seekers of knowledge merely want to arrive at truth. He described a dilemma faced by Williams in defending this argument: (I) If the subject wants to know then it is not the case that all he wants is true belief, but (II) if the subject just wants to have a true belief then it is not clear why he should want to know. Walker proposed a solution to the dilemma: a subject has not arrived at a belief whether p unless the believer takes himself to have acquired knowledge that p. On this account, people want to know whether p because only when they have achieved this aim will they believe that p. 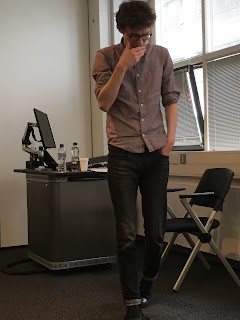 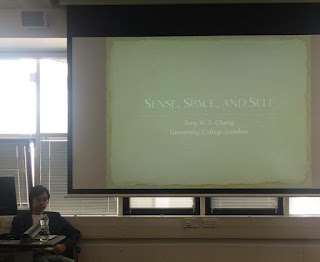 Casey Doyle started with the premise that although it is possible to know of your intentional attitudes by testimony there seem to be reasons against doing so. He argued that an account of first-person authority ought to be able to explain this but the standard view, according to which we have epistemic privilege over our thoughts, cannot. He also claimed that there is no inherent weakness in testimony that explains why we should not depend upon it. Doyle proposed an agential model of first-person authority as an alternative explanation of first person authority. 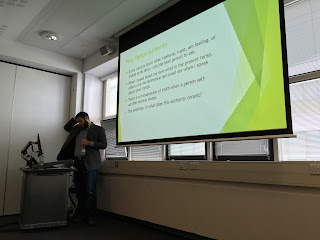 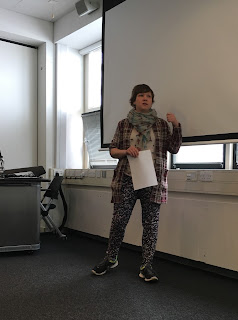 The meeting finished with my talk. I discussed how humans seem to face an ethical/epistemic dilemma; ethics demands that we treat people equally, as equally likely to possess certain traits, but if knowledge is our aim we should reflect how different social groups tend to possess some features at different rates. I used psychological research to argue that the best choice from the epistemic perspective is frequently the best choice from the ethical perspective: avoiding stereotyping even when this involves failing to reflect social realities.