On 10th May 2016 the Royal Society of Medicine hosted a one-day conference on Mind, Madness and Melancholia: Ideas and institutions in psychiatry from classical antiquity to the present. I attended the two morning sessions which focused on the concept of madness and melancholy in ancient Greece, ancient Rome, and in the golden era of Arab medicine. 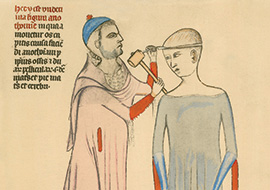 The first speaker was Glenn Most (pictured below), professor of Greek Philology at the Scuola Normale, Pisa, Italy. He started by challenging the view that there was a smooth transition from mythos to logos in the Greek thought, that is, that phenomena previously regarded as mysterious and supernatural were then explained by human reason. When it comes to mental phenomena concerning insanity, for a long time a multiplicity of methods and approaches co-existed. People who manifested strange behaviour could be 'treated' in phases: confined first, asked to try physical remedies second, conceived of as possessed by the gods and subject to religious rituals third, and then left to simple prayer. Thus, madness could be approached medically by the ancient Greeks, but was also given some religious and moral significance, as if being mad were a punishment by the gods. 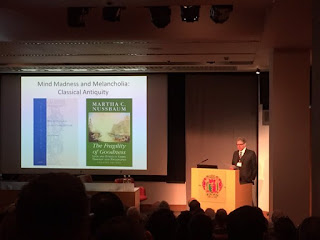 Plato in the dialogues distinguished between illness of the body and illness of the soul, further dividing the latter into mania and melancholia. A gradual medical approach to illnesses of the soul followed, with Hippocrates developing a humoral theory of them (according to which illnesses are causes by imbalances among elements such as yellow bile, black bile, phlegm and blood), and Galen identifying the brain as the organ where problems arise. Although Galen studied the anatomy of the brain, his remedies were not based on such investigations, but more akin to modern 'talking therapies'.

The second speaker was Vivian Nutton (pictured below), professor of the History of Medicine at the First Moscow State Medical University, Russia, who discussed the legal and literary aspects of the view of insanity in ancient Rome. The Romans appeared very interested in the definition of madness, but not because they were concerned about how to treat mad people, rather because they wanted to establish what to do in case of madness to manage property and ensure people's duties and rights. Thus, they asked what rights a mad person may have, who should be appointed as their guardian, and what duties the guardian should have. For these purposes, Cicero found the Greek distinction between mania and melancholia unsatisfactory, because the label 'melancholia' covered too much. He also worried that madness was not clearly distinguished from unsoundness of the mind. 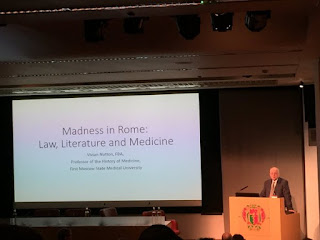 Caelius Aurelianus, member of the Methodic School, focused on treatment rather than the causes of madness, rejecting the humoral theory by Galen. He saw madness as an impairment of reason (alienatio) characterised by a great variety of symptoms, and deemed it impossible to provide a narrower definition due to the different manifestations of madness in behaviour. Rufus distinguished between acquired and congenital melancholia, arguing that the former was due to bad lifestyle choices and the latter to imbalances. Galen suggested diet and lifestyle changes to deal with physical imbalances, and "therapy of the word" for melancholy, where it was important to understand affected people and gradually bring them away from the illness, often by distracting them with theatre or hunting.

Next, Julian Hughes (pictured below), professor of Philosophy of Ageing and Consultant in Old Age Psychiatry at the Northumbria Healthcare NHS Foundation Trust, focused on classification and diagnosis instead. He found that some of the ideas that inspired the Diagnostic and Statistical Manual of Mental Disorders (DSM) in its first edition also circulated in the Methodic School and the thought of Caelius Aurelianus in particular. Whilst the Dogmatic School was primarily interested in hidden causes and the Empiric School in evident causes, the Methodic School concentrated on observable symptoms. Just like in the DSM, description of symptoms seemed more important than theoretical systematisation. Although there was some attempt at investigating the theoretical bases of illness, description of symptoms and practical treatment had priority. 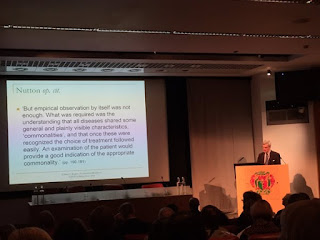 Hughes also discussed some of the current critiques of the DSM concerning the medicalisation of normal experience and the importance of values in psychiatric classification, arguing that it is important to ask what the goal of psychiatry is before these debates can be settled.

The last talk of the morning was by Peter Pormann (pictured below), professor of Graeco-Arabic Studies at the University of Manchester, who described both the influence of classical thought on Arab medicine and the innovations promoted by Arabic physicians and philosophers. Direct influences include Hippocrates, Galen and Rufus, whose works were translated in Arabic and were object of study. Innovations include the development of a taxonomy of types of melancholia, specifically scholarly and religious melancholia. Scholarly melancholia (studied by al-Tabarī) is caused by excessive contemplation and isolation and examples of people affected by this condition are philosophers and mathematicians. Religious melancholia (studied by Al-Rāzī) is caused by immersion in prayer and preoccupation with the gods at the exclusion of everything else. 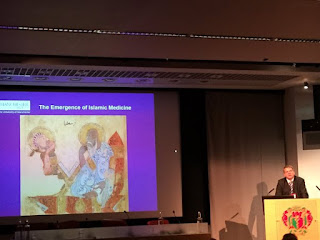 As melancholia is caused by "thinking about something startling", it is also treated by correcting erroneous thinking and no physical remedy is suggested. Dialogue with the melancholic person is the key to solving the problems.

The two sessions I reported from were extremely interesting, not only rich in information about the history of madness, but able to stimulate reflection on very core issues in contemporary psychiatry.