In this post, Matilde Aliffi (PhD student at the University of Birmingham) reports from the 7th International Summer School of Affective Science (ISSAS) held at Château de Bossey between the 7th and the 14th July 2016. This year ISSAS was entirely dedicated to investigating the role of emotions in fiction and virtual worlds. World leading experts in philosophy, psychology, educational science, neuroscience, affective computing and game design gave their lecture to an audience composed by an international and interdisciplinary community of about forty PhD students. 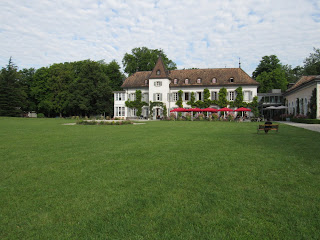 During the school, workshops were also held on thought experiments, data-analysis, programming and text-based emotion recognition. Participants were divided in eight teams and had the opportunity to design and present a collaborative and interdisciplinary research project tied to the topics of the school. Alongside the lectures, participants also enjoyed artistic events that complemented nicely the lectures with a more direct personal experience of engagement with fiction and virtual worlds.

What follows here is a brief presentation of the key talks of the summer school.

The talks begun the second day of the school, because the first day was mainly dedicated to socialising and welcoming participants. The theme of the talks of the second day was the relation between emotions and imagination in fictional worlds, and was approached from a philosophical perspective. The speakers offered an answer to questions such as “What distinguishes fiction from non-fiction?” or “What is imagination?”, “Is imagination central to understand fiction?”.

A different stance about how we should understand fiction was offered by Derek Matravers (Open University). He argued that there is no interesting special relation between imagination and fiction, and that imagination has no explanatory role in understanding the distinction between fiction and non-fiction.

The third day was dedicated to emotion modelling and curiosity in artificial agents. Jonathan Gratch (University of Southern California) talked about modelling artificial agents that understand and display human emotions. He illustrated some interesting applications of his work in business, especially for understanding multi-agents’ interactions and for screening of depression and post-traumatic stress disorders.

Pierre-Yves Oudeyer (Inria) gave a very interesting presentation of the state-of-the-art of the research on autonomous learning in human and robots. He stressed the importance of curiosity for autonomous learning. For Oudeyer, curiosity reflects a basic form of motivation to search novelty, take challenges and reduce uncertainty. He highlighted how curiosity-driven learning fosters cognitive development through self-organising mechanisms.

The fourth day was dedicated to the connection between emotions and immersion in virtual worlds. Mel Slater (University of Barcelona) approached the theme of immersion investigating body ownership illusions and body agency illusions, which consist respectively in the illusion of having a different body and in the illusion of acting using a different body. Slater explained how these illusions can be generated through embodiment in a virtual body using immersive virtual reality. He presented studies where participants in a virtual reality environment embodied a child or a person of a different race. Interestingly, these illusions changed participants' perception, attitudes and behaviours. He also proposed some interesting applications from self-counselling to even “beaming” someone to a different place, through embodiment in a robot.

William Cunningham (University of Toronto) focused on more conceptual issues such as defining “emotion” and “emotional episodes”. He proposed a new conceptual framework where emotion is not contrasted with cognition, but intertwined with it. He also proposed new possible ways of investigating the emotions and emotional experiences using developments in computational cognitive neuroscience.

Susan Rivers (Yale Center for Emotional Intelligence) presented new methodologies for fostering emotional intelligence especially in children using videogames. Rivers’ starting point is the importance of children’s socio-emotional competence for their development and achievement of future skills, such as leadership potential and academic success. She described the project of creating a videogame that can be used for facilitating social and emotional skills in schools.

The fifth day of the summer school was mostly dedicated to social activities. During the evening, Marientina Gotsis (USC School of Cinematic Arts) gave a talk focused on creating virtual reality entertainment that creates pleasurable and emotional engaging experiences. She presented her main method of creating interactive entertainment that generates health and happiness, based on fostering factors such as the somatic gratification in physical interacting with the game, and the cognitive challenge that the game poses to players. In the second part of the evening she guided participants in tabletop game experience called “The brain architecture game”. During this game, participants experimented the powerful role of experiences in shaping the brain, having to build a child brain during the first age of his development. 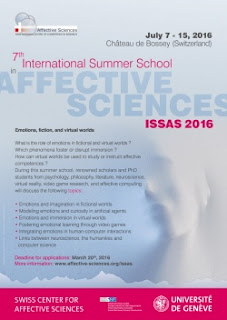 The sixth day of the summer school was dedicated to interventions for facilitating emotional learning through videogames. Isabela Granic (Radboud University Nijmegen) presented her research for designing interventions using videogames for emotional and mental health. She stressed the benefits of using videogames for mental health treatment for anxiety and depression. In particular, she presented Mindlight, a videogame developed by her research group that responds directly to the player’s attention. While playing this videogame, children learn in a fun way to regulate their emotions and to focus their attention to positive rather than negative cues.

The seventh day was dedicated to the integration of emotions in computer-mediated interactions. Nicholas Gillian (Google) gave a talk on machine learning techniques for expressive gesture recognition. He presented some examples of expressive gesture recognition used by electroacoustic musicians and some of the main problems and features of machine learning techniques. He then concluded with some possible applications of these tools in other areas, such as psychology and mental health.

Alessandro Vinciarelli (University of Glasgow) talked about how actual widespread technologies affect our communication. In a face-to-face interaction, we rely on many cues, such as visual and vocal expressions that are almost absent while interacting via phone or instant messaging. However, he argued that we use other nonverbal cues (e.g. overlapping, backspace, punctuation) for carrying out the same communicative functions in these interactions. Towards the end of the talk, he investigated the relation between the pictures we like and our personality traits, concluding that the picture we like tells something about our personality.

During the last day of the conference, students presented their projects and Daphne Bavelier (University of Geneva) gave the school’s closing talk. She presented her research about the use of action videogames for training the brain to learn new skills. She argued that action videogames help people to improve on a large variety of skills, in particular of abilities connected with attentional control. She suggested that action videogames help people to learn non-specialised skills transferable on other domains, such as doing math, and make better decisions. However, the specifics details of why this occurs remain still unclear.
Posted by Lisa Bortolotti at 08:00