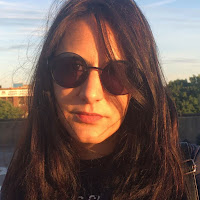 Today's post is by Christina Moutsiana (pictured above), who is Lecturer in Cognitive Neuroscience at the University of Westminster. Her research focuses on perceptual and cognitive biases which she investigates using a variety of neuroscience tools, behavioural paradigms, and psychophysics. In this post she discusses some of her recent research on belief updating and brain architecture (see Moutsiana et al. 2015 for more details).

We make decisions every day, some of which are critical to our health and wellbeing. These decisions are driven by the beliefs we hold. But do we form beliefs in an accurate manner that allow us to avoid harm and maximize reward? Cognition is not impervious to error, especially when emotion comes into play. One of the most robust cognitive biases is asymmetric belief updating; the tendency for healthy individuals to alter beliefs about their future to a greater extent in response to good information compared with bad information.

Decision neuroscience research suggests that updating beliefs involves not only brain regions known to perform complex cognitive functions, but also key structures for emotion. I therefore wanted to know if individual differences in brain connectivity between these structures relate to biased belief updating. To investigate that I exploited DTI (diffusion tensor imaging) that enables tracking of neural pathways, together with the belief update paradigm (Sharot et al., 2011). The belief update paradigm allows us to compute individual differences in updating self-relevant beliefs about possible life events.

Let's imagine you hold a belief about the likelihood of having a bike accident. I provide you with evidence that this event is more likely than you had initially expected (bad news). I later ask you again how likely you are of have a bike accident, so that I can assess whether you had integrated the information I gave you to adjust your belief. I do the same with your friend. I can then calculate how you differ in your ability to update your beliefs and learn relative to your friend. Replicating previous findings, I found that people learnt better in response to good news than bad news.

Performing probabilistic tracking on the DTI images enabled me to identify neural paths in each individual’s brain and calculate how strong these paths are between areas relevant to belief updating. I focused on paths that include specific frontal regions (the inferior frontal gyrus (IFG) and the medial frontal cortex), which have been found to be associated with valence-dependent learning asymmetries (Sharot et al., 2011). Next, I looked whether connectivity in those networks was related to asymmetric beliefs. Indeed the results identified a neural system of interconnected brain regions for which the strength of white matter connectivity was associated with belief updating as a function of valence.

In particular, the results highlighted an opposing relationship between left frontal–subcortical white matter connectivity and updating in response to good and bad news. For good news (e.g., learning you are less likely to have a bike accident than you thought), stronger connectivity within this system, particularly between the left IFG and key regions for emotion such as left amygdala, hippocampus, pallidum, was associated with greater changes in belief across individuals. Conversely, for bad news, stronger connectivity between the left IFG and left putamen, pallidum, and insular cortex was related to reduced change in beliefs. Thus, left frontal–subcortical anatomical connectivity was associated with belief change differently based on the valence of the information.

Together with past findings (Sharot et al., 2011, 2012), these results characterize a neural architecture that may allow valence to be incorporated into self-relevant belief updating.