This post is by Amy Chandler, a sociologist currently holding a Chancellor’s Fellowship in Health, through Arts, Design and Humanities at the University of Edinburgh. In this blog she introduces her book, Self-Injury, Medicine and Society: Authentic Bodies, published by Palgrave Macmillan. Find out more about Amy's research. 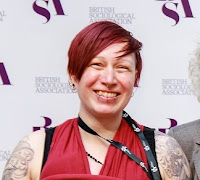 The book is the culmination of over 10 years research, and a much longer period of engagement and interest, in the practice of self-injury. In the book I focus on the different ways that people make sense of self-injury, through an analysis of accounts – or narratives – about the practice.


Self-injury is commonly associated with mental ill-health, seen as ‘irrational’ or ‘impulsive’. As such, the ways in which self-injury is explained might be understood by some as an example of an ‘imperfect cognition’. People report injuring their bodies in order to make themselves feel better – how could this be possible? In the book, I explore the diverse ways that people attempt to explain, justify or excuse self-injury, highlighting the central role of broader cultural ideas about bodies, emotions, and medicine in shaping what can (and cannot) be said about self-injury.

One increasingly common way that self-injury is explained suggests that the act of injuring the outside of the body (usually via cutting) serves to ‘transform’ emotional pain into physical pain. This narrative rests on a number of assumptions: that ‘emotional’ and ‘physical’ pain are or can be separate; that, simultaneously, these potentially separate pains are irrevocably linked – since causing ‘physical’ pain affects the intensity or presence of ‘emotional’ pain.

Such accounts of self-injury draw on well established, intractable, yet heavily critiqued dualisms – dualisms often linked to Descartes’ (in)famous maxim ‘cogito ergo sum’ (I think, therefore I am). The accounts both rely on and challenge the notion that our ‘minds’ and ‘bodies’ are separate; that the ‘physical’ body is distinct (or can be) from our ‘emotional’ self.

This ‘transformational’ narrative of self-injury also raises the question of why, for some who self-injure, the creation of a visible, tangible wound is required as a substitute for ‘emotional’ pain, or is seen as preferable. Accounts about self-injury draw on notions of discomfort and uncertainty about ‘internal’ emotions. Some perspectives interpret this as relating to a deficit in the self-injuring individual: they are unable to ‘regulate emotions’; they cannot ‘recognise’ or fail to effectively manage emotional states.

However, there are broader social contexts regarding norms of communicating about negative emotions which are also pertinent, and which may help to better understand such apparently individual deficits. Interviews with people who have self-injured frequently draw attention to silences: to families who do not want to talk about or acknowledge distress; to a desire to avoid ‘burdening’ friends with problems.

Discomfort with, or difficulty tackling emotional distress or mental disorder is also reflected in enduring stigma associated with mental illness, long-standing underfunding of mental health services, and frequent failure to acknowledge the problematic distinctions made between ‘mental’ and ‘physical’ health (Millard & Wessley, 2014).

In such a context, it becomes perhaps more understandable why ‘emotional pain’ might be difficult to acknowledge or discuss in interpersonal settings, and why individuals might see a physical wound as preferable to emotions that are understood as more intangible and, importantly, less ‘real’.