Today I report from a workshop organised by Anna Ichino and Bence Nanay at the University of Antwerp (pictured below) on 31st May, 2017. The themes included subdoxastic attitudes, imagination, and belief. 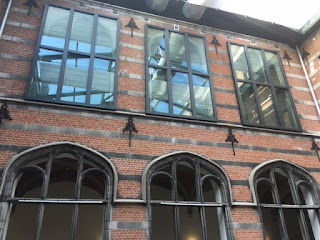 I (Lisa Bortolotti, Birmingham) was the first speaker and discussed costs and benefits of confabulated explanations of one’s attitudes and choices. I started defining confabulation and providing several examples from the clinical and non-clinical literature. Then, I considered the standard philosophical reaction to confabulation, that it is evidence for a failure of self-knowledge, and rejected it.

Lars Danzer (Essen) talked about subdoxastic states, subpersonal states, and the relationship between the two distinctions. Some subdoxastic states are subpersonal, but not all of them are. Danzer focused on tacit knowledge of linguistic rules as the principal case. What are subpersonal states? Following Zoe Drayson (2012), the distinction is between level of description or explanation, not between kinds of processes.

Personal-level is the level of folk-psychology (e.g. beliefs). Subpersonal level is the level of computational psychology and neuroscience (e.g. neural states). The subpersonal level is supposed to provide vertical explanations of personal-level facts. But drawn this way, the distinction is not exclusive. If you hold an identity theory, there are no two different categories.

Anna Ichino (Antwerp) presented her thoughts on imagination and its relation to belief based. She started with some examples of conspiracy theories and superstitions to show how common they are, and referred to several robust results from psychological studies. This magical way of thinking differs from the scientific view of the world and sometimes it involves ontological confusion (it is scientifically impossible, not just implausible).

For Ichino this is not a sufficiently good reason to endorse (1), because superstitions and magical thinking do not meet the other constraints on belief: sensitivity to evidence and inferential integration. She used the case of conspiracy theories on Lady Diana’s death and other examples to make this point. Finally, she explains how the formation of magical and superstitious thoughts proposed by Risen(2016) and her Psychology of Belief and Judgement Lab fits with her interpretation of them being a form of imagination: system 2 detects the intuition offered by system 1 but does not correct it (acquiescence).

Next speaker was Laurie Paul (UNC Chapel Hill) talking about transformative imagination, empathy, and alienation. She argued that, when we assess, praise, and blame others we need to be able to empathise with them. Paul did not just refer to affective empathy, but a richer notion of empathy: in her sense, to empathise is to try and view the world from the experience and perspective of another, to represent the first-person perspective of another via one’s own first-person perspective. So, to empathise is a cognitive act but also an experience in itself, and involves imagination. It is important to empathise with other people, but it is also important to empathise with your future self, especially as your current self makes decisions that will impact on your future self. 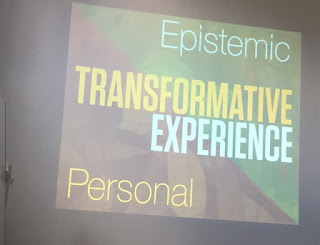 Could there be circumstances where you cannot empathise with your future self? How would you make decisions about the future then? Sometimes first-person knowledge is not enough and cannot be projected into the future, for instance because some experiences are such that they would change our perspective completely (transformative experiences). Examples are having a first child, experiencing drug addiction, becoming disabled, seeing for the first time: in such cases, an epistemic change causes a personal change.

One problem is that by engaging in an imaginative act we may change ourselves and our preferences (epistemic corruption). One example would be this: how fully can you empathise with a terrorist without coming to share some of their views that you now utterly reject? It may be morally required to empathise with your ‘enemy’ but it is also morally risky. So it may not be the rational thing to do.

Eric Schwitzgebel (UC Riverside) concluded the workshop with a talk on the pragmatic metaphysics of belief. Intellectualism about belief says that intellectually endorsing something, with sincerity, is enough to believe it. Pragmatism about belief says something different: intellectual endorsement is not enough, because belief is behaviourally demanding. Pragmatism is reflected in two aspects: (1) there is an emphasis on practical behaviour in defining ‘belief’; (2) there is a commitment to a metaphilosophical pragmatism.

The metaphilosophical commitment is about the recognition that there are antecedently open cases: in some circumstances the world does not force a categorisation on us, and it is possible to classify something as either an A or a B. Such decisions reflect our interests and values.  An example is what a person is. A bottle of water is not a person, a woman typing is a person. But what about a fetus? When we answer this question, we express a value.

There may not be always a right or wrong way to classify something independent of our values and interests. Metaphysical battles are political battles for control over the use of terms we care about (e.g. ‘love’, ‘happiness’, ‘torture’). In the case of belief, the interesting cases are those where someone intellectually endorses p but does not act on p. Schwitzgebel talked through a case of a person (Daniel) who professes to respect people who have menial jobs but he behaves ackwardly towards them.

What does Daniel believe? Schwitzgebel argues that a term as important for philosophy as ‘belief’ (central to many subdisciplines) should be viewed pragmatically as what is reflected in behaviour, because behaviour is what we should care about: “What you believe is not what you say you believe, it’s how you live”.

The workshop was very informative and thoroughly enjoyable. The organisers fostered a friendly atmosphere which was conducive to excellent exchanges at discussion time.