In this post, I report on our third annual workshop, this year with a focus on confabulation, which took place last month at St Anne’s College, Oxford. We had an international programme of talks from both philosophers and psychologists, and talks addressed a range of topics, including exploration of both the varieties and boundaries of the phenomenon of confabulation; application of the notion to new areas of study; and how developments in conceptual models of confabulation influence new therapeutic interventions. 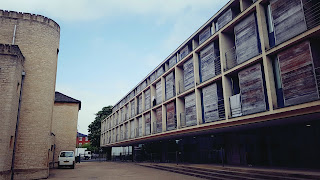 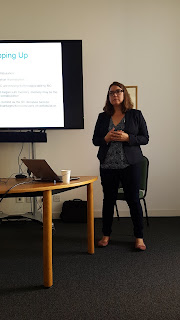 Bill Hirstein encouraged us to think about whether phenomena in Capgras syndrome, often taken to be an example of a syndrome in which confabulations are produced, really ought to be understood as such. People who have Capgras syndrome often claim that their loved ones have been replaced by imposters, who appear right on the outside, but are wrong on the inside. But why would people with different experiences, views, and histories, come up with same confabulation about people close to them? Bill proposed instead a model on which there is a dysfunction in the brain’s default mode network that prevents the Capgras patient from representing the minds of their loved ones, producing a failure of mind reading, a position supported by research on the neural locus of damage in Capgras syndrome (e.g. Thiel et al. 2014). Bill concluded by outlining how a theory of responsibility that tracks the brain’s executive processes might explain why some confabulators (e.g. in some non-pathological cases) can be considered responsible, whilst others are not. 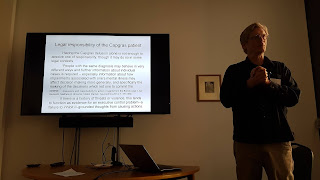 A popular view is that confabulation undermines first-person authority (FPA) of self-ascriptions. If my explanation that I chose a piece of clothing from a series of options because it was the brightest is a confabulation (I in fact chose it because of the position of the item) then the reliability of my self-ascriptions seems under threat. Leon de Bruin and Derek Strijbos have contested this view, suggested that self-ascriptions might not always function to explain a past behaviour, but to identify reasons we find persuasive for making a particular choice, in order that we can act on those reasons in future choices, helping us to “self-regulate” (Strijbos & de Bruin 2015). In their talk, Derek and Leon considered the implications of this view for clinical cases. Self-regulation might be enhanced by maintaining openness toward the gap between self-ascriptions and one’s actions, and tolerance of the accompanying emotional tension. Derek and Leon explored the possibility of therapeutic interventions which develop these attitudes in clinical cases in which misalignment poses problems in social interaction. 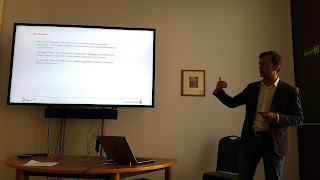 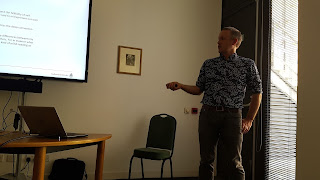 Tom Stoneham gave a paper, co-written with Louise Moody, arguing that the standard model of dreams – according to which dreams are experiences presented to consciousness during sleep, and that dream reports are broadly accurate in their temporal representation of a sequence of experiences – is incorrect. If you’ve ever had a dream in which events seem to lead up to the shrill sound of a siren, which, as you gradually regain consciousness, you realise is in fact the sound of your alarm clock, you might sympathise with the proposed view. Tom and Louise used examples like this, as well as research showing that our dream reports seem to be influenced by emerging aspects of the cultural zeitgeist, to argue that dreams are largely nonsensical series of experiences, and that dream reports are confabulations which provide a post-hoc sense-making narrative moulded by our cultural expectations of what we think we ought to have experienced. They conclude by discussing the potential of this model for therapeutic interventions with people with complex trauma experiences for whom nightmares are frequent: early research suggests that seeing dreams as attempts to make sense of un-ordered experiences gives people the chance to rescript their experiences with beneficial effects. 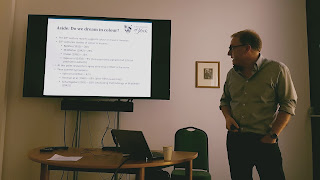 I assessed two apparently competing accounts of confabulation, Coltheart’s (2017) notion that confabulation in all populations stems from the drive for causal explanation, and Örulv and Hydén’s (2006) argument that clinical confabulation functions not as a causal explanation but as an attempt to impose personally resonant meanings on disorientating experiences. I argued that there is some truth in each account: we are all narrative explainers, disposed to establish meaning in our accounts of our observations and experiences. This trait confers psychological and social benefits, but, because meaningful narratives are not necessarily well-grounded, there are inevitably epistemic costs. However, this is not the end of the epistemic analysis. Drawing on developmental studies and other research in social psychology, I showed that our narrative trait enables us to establish meaningful links between otherwise disparate items in experience, which can actually facilitate information preservation, and so there are also epistemic benefits to being narrative explainers.

All these papers are invited to our special issue on confabulation in Topoi, for which the submission deadline is 31st July. You can find out more here.