Political Emotions. The Role of Affect in Social Movements

This post is by Katja May, PhD candidate at the University of Kent.

Emotional Politics – The Role of Affect in Social Movements and Organizing took place on 31 May 2018 at the University of Kent in Canterbury. The conference aimed to bring together academics, activists, policy-makers and practitioners to share current concerns and developments in the research and practice surrounding emotion, organizing and social movements. It was co-hosted by the Gender, Sexuality and Culture Research Cluster in the School of Social Policy, Sociology and Social Research at Kent and kindly sponsored by the Centre for Colonial and Postcolonial Studies, the School of English and the Centre for Gender, Sexuality and Writing. The organizers Katja May and Angela Matthews, are both PhD students at Kent, and their joint interest in affect, emotion and social transformation was the driving force behind this conference.

Veteran activist and scholar Angela Y. Davis (2016) claims that in order for a movement to be effective it needs to mobilize the masses. As such, this conference asked:  How does one reach the masses? What motivates people to join a movement, especially if they are not directly affected by the campaign’s agenda and the successful implementation of its goals? How can organizers and campaigners make use of emotion, feeling and affect as these circulate between subjects and objects? What problems may arise in the concrete experience of organizing? Speakers approached these questions from a variety of ways and their various disciplinary backgrounds ranging from sociology, geography and politics to literature, arts and journalism provided an interesting mix of different methodologies and critical arguments. 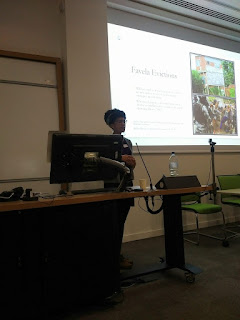 The morning panels engaged with the topic of collective and distributed emotion as well as with affective media representations of social movements and protests. Afterwards, Carolyn Pedwell, Reader in Cultural Studies at the University of Kent, delivered her brilliant keynote “Digital Tendencies: Intuition, Algorithmic Thought and New Social Movements”. Pedwell drew on a number of different recent examples such as Occupy and Black Lives Matter to flesh out the role of the digital in contemporary organizing.

While conscious of the, at times, certainly problematic connection between social media, affect and neoliberalism, she tried to move away from a narrow analysis of the digital as either negative or positive. Instead, Pedwell argued that the digital can be useful in the development of social movements and ultimately in the adoption of social change. As a medium for communication and continuous engagement it can be used by people to react to that which is in process and may enable movements to “combine a tendency to oppose oppression with a capacity to sense change as it is happening”. 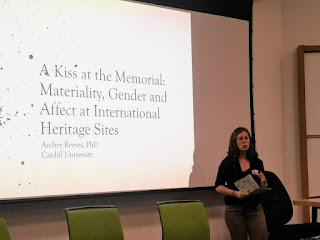 The afternoon included panels on organizing and the ethics of care, the scholar-activist, affective sites of communication and the affective struggles of those who sometimes find themselves on the far side of social change and activism. Jennifer Chisholm from the University of Cambridge, presented findings from her PhD research on women leaders in the Favela Housing Rights Movement in Rio de Janeiro. She argued that the women employ what she terms “vulnerability talk” as a form of “patriarchal bargaining” to justify their position of leadership among male community members. Only by presenting themselves as “leaders-cum-caregivers” appear these women to be able to secure their active position within the movement. A different perspective was offered by Audrey Reeves, from Cardiff University who examined “the importance of affective connections to material objects” in a series of American war heritage sites.

Marked by a dynamic atmosphere and lots of engaging discussion, the day then concluded with inspiring poetry performances by Kat Peddie and Betsy Porritt (both Kent) whose creative work addressed the conference theme in different but equally insightful ways. To find out more about what happened during the conference in this Twitter story.
Posted by Valeria Motta at 08:00