Shadows of the Soul: Philosophical Perspectives on Negative Emotions 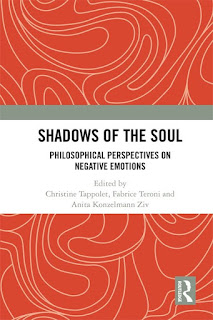 Try to name as many types of positive emotions as you can. Now do the same for negative emotions. You will probably agree with the often-heard claim that the vocabulary we have at our disposal is especially rich for negative emotions: we distinguish between sadness, fear, disgust, regret, remorse, despair, resentment, indignation, contempt, jealousy, hatred, etc. Many of our everyday discussions turn around these negative emotions, aiming at a better understanding of their causes and moderation of their sometimes devastating effects.

That being said, we harbor ambivalent attitudes towards negative emotions; we do not always undergo them reluctantly, for instance. Not only do we think that some situations or objects merit negative emotions, but we also actively pursue them—the aim of many recreational and artistic activities is to elicit fear, and we sometimes enjoy undergoing emotions such as anger and disgust. So, if we do often try to get rid of negative emotions, we certainly do not aim at a purely positive affective life, a life whose interest and coherence can itself be questioned. Indeed, the interest and depth of episodes of satisfaction and joy often appear to be enhanced by the negative emotions to which we are prone.

Moreover, is it not difficult, perhaps even incoherent, to attribute the sorts of attachments to values (justice, generosity, friendship), persons and institutions that prove so central in our self-conception to an individual deprived of negative affect? What would remain of a sense of justice if we lacked the disposition to be outraged when confronted with a blatant injustice?

Shadows of the Soul is the first volume to consider negative emotions as a topic of philosophical study in its own right. It gathers fourteen original contributions (approx. 5000 words each) written by experts in the field and aimed at a non-specialist audience. These articles allow the reader to explore the diversity and complexity of negative emotions, as well as some of the fascinating philosophical issues they raise. The book opens with the exploration of the most fundamental amongst these issues: what makes an emotion negative, and how does the existence of negative emotions affect philosophical approaches to the emotions?

Next, it explores the role of negative emotions in imaginative resistance – the fact that we have a hard time imagining evaluative contents that contradict our convictions (e.g., that killing girls at birth is a good thing) – and in emotional ambivalence – how should we explain the fact that we often have negative and positive attitudes towards a given event? Is this irrational? Beyond these broad theoretical issues, the study of any negative emotion raises a variety of more specific but no less important questions.

The remainder of the contributions allow the reader to explore a fair share of them: the nature of being moved, negative existential feelings, nausea and its relation to aesthetic properties, the distinctive relation between disgust and stench, the value of anxiety, the rationality of grief, the moral standing of shame and contempt, the role of negative emotions in racism, and the irrationality of jealously.  Our hope is that the volume showcases both the intrinsic interest of exploring negative emotions as well  as its potential impact on theorizing about the emotions, which must give due attention to the richness and complexity of our affective lives.