Lynn-Marie Harper participated in the Philosophy of Mind workshop series for people with various interests in, and experiences of, mental health that Project PERFECT ran in partnership with Mind in Camden in the autumn of 2017.

Here, she shares some of her poetry. She has always written but started to share her poetry when taking workshops with the poet, novelist and confidence inspiring tutor Aoife Mannix in 2010. Some of the poems below are a direct response to the philosophy workshops, and some address life-experience more generally. 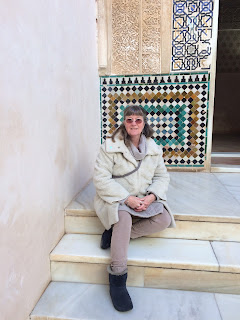 The two poems I presented at Conway Hall at the conference on our last meeting of the Philosophy of Mind course were both written during the workshop series. The first, ‘Rocking the Foundations” was written initially as a response to an assignment on metaphor set by a poetry class tutor, Poet Philosopher Alan Murray.

It served a purpose beyond the assignment though in that I could express my feelings and reactions to a longstanding and ongoing situation involving the house I live in, in what sounds like an exaggerated form, however there was truth lingering within it and hence I could present it as it uses the language of mental distress to describe feelings elicited by movement and deficiencies in building structure.

Gaping crevasses only imagined in manic hysteria
paranoia of costs and sectioning, in both senses

Looking to each in despair, depression
creeping along fault lines, foundations undermined


The second poem, Or Should I say……… was written immediately I returned home from the last session of the course in response to the question Sophie asked about what impact the course had and I answered in an image ridden poem, which is that it became increasingly evident that we are all on a continuum between mental illness and wellness, both individually and as a greater society of seeming parts, the communal I, we, in fact, all of us, together. It’s a very relieving recognition…

Across a broad continuum I float on the sea of dreams
Or should I say I paddle in a round boat of my own seeming making
which I realise is not my own at all but part of that big picture of oneness
or should I say we float, we paddle, we live, we are,
and that we ness, we we weness is all we are waiting for
for the ship to re arrest us as we glide motionless on the sea of expectation

dreams have turned, become some other some else, something nightmarish,
coated in overwhelm sweetened with saccharinous jargon and vicious labelling
overladen with yellow light and electrical voltage, imaged accordingly

Its so simple really. We are all on this continuum, we and all, on and are
arranged in an order that tells of despair and easy reckoning
we look at each other and say we, we talk of how it has been, what we’ve done

thought, felt and name it I. It is the one I, we, and we move along the conveyor belt
at different speeds and in varied configurations but none is left out of this vast continuum
we are all more or less ill, more or less well and at last it is recognised for what it is.

That recognition is perhaps hard to hold on to or recall in the midst of isolating experience and the poem that follows is about the aftermath of experience I had when I left England in my teens and lived in the Netherlands for a while and went travelling in a perturbed and unsettled state of mind and feeling and then later returned to Holland and the sense of isolation shattered when a good friend opened the door to me and I once again felt known and loved.

‘Kanga today is a truly international phenomena”
said the textile gallery video,
accompanied by the screeching of children
in the cafe downstairs

I was back in all senses
the physical, psychological, spiritual
and the great sensory experience started up
as if the battery had been drained and then replaced
or a mechanism wound down and rewound

Over the years I have often wished that
the world would enter a state
of suspended animation
whilst I caught up, as forlorn a hope
as wishing that state gone
when in it’s its thrall

But in the gallery the Kanga tradition
presentation rolled on easily
and that shattering
which abruptly ended a state of contraction
could still not be pinned down or consciously allied
to any true simile or metaphor
by as many ‘as ifs’ as I applied
closer than, ‘“it was like a glass screen shattering
between me and the world”

As I sat in the sunshine considering and writing this,
I saw that nothing before or after had compared
with the magnitude of seeing that friend’s face in Delft
the gratitude only now fallen into an equation

One shattering = gratitude x millions
1972 - 2016 = 0, no time at all
Fragmentation reintegrating into wholeness = One
This, me here now, remembering.

You can read more of Lynn-Marie’s work here.