Rationality, Time, and Self

This post is by Olley Pearson who is currently a teaching fellow in the Department of Philosophy, Durham University. Olley focuses on metaphysics, though he considers a number of topics from this perspective including the nature of rationality, the self, the emotions, time, and ontological fundamentality. In the post Olley describes some of the core themes of his recent book Rationality, Time, and Self. 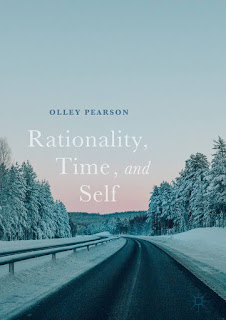 In this book I provide a new argument for the tensed theory of time and the emergence of the self: there is more to time and ourselves than some philosophers suggest. The basis of this argument is a concern that peculiarities of meaning alone are not enough to account for the special role that is played in our lives by tensed and first-personal utterances and the beliefs they express (here known as tensed and first-personal beliefs).

Perry style cases in which a specific individual must perform an action at a specific time have made it clear that we sometimes need tensed and first-personal beliefs. For example, if I am going to get this blog post finished on time, I need to have some idea what the date is now and that I am the author of the book being discussed. What has been less clear, however, is the nature of this necessity, or, to put it more precisely, what these beliefs are necessary for. In this book I argue that they are not merely needed for specific movements of my body.

The basis of this challenge lies in the elaboration and defence of an externalist account of reasons and rationality. According to this account it is the world or facts that motivate and justify us. Reasons are facts. Further, rationality consists in responding appropriately to those reasons —facts— one is aware of. What matters to the rationality of an action, therefore, is the facts of is aware of when acting and if two beliefs are to have a different rational import from one another they must concern different facts. Mere differences in meaning cannot account for the unique role of tensed and first-personal beliefs. There is something special about me and about now (that is why I need beliefs about me and about now to act rationally in submitting my post).

In this way my book provides a new argument for the tensed theory of time and the emergence of the self through clarifying the role of rationality in Perry style cases and defending an externalist account of rationality. However, there is a more general idea at the core of the book. We can look to our beliefs and utterances to inform us about the nature of the world.

Previous attempts to make such derivations have rightly suffered from neglecting issues of opacity. We should not simply assume that two utterances capture different facts because they differ in meaning. But, problems of opacity can be avoided if we argue that two utterances must capture different facts because they are of differing rational import. Perhaps issues of normativity can and should guide our investigations in metaphysics. I hope these more general ideas can resonate quite independently of the specific issues of time and self that are also raised in the book.