Garrett Cullity is Hughes Professor of Philosophy at the University of Adelaide, where he teaches and writes on topics in practical, theoretical and meta-ethics. He taught previously at the Universities of Oxford and St Andrews.

He is a co-editor (with Berys Gaut) of Ethics and Practical Reason (Clarendon Press, 1997) and the author of The Moral Demands of Affluence (Clarendon Press, 2004). In this blog post he talks about his new book Concern, Respect, and Cooperation. 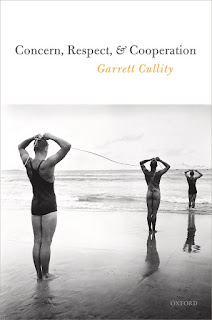 Three things often recognized as central to morality are concern for others’ welfare, respect for their self-expression, and cooperation in worthwhile collective activity. When philosophers have proposed theories of the substance of morality, they have typically looked to one of these three sources to provide a single, fundamental principle of morality – or they have tried to formulate a master-principle for morality that combines these three ideas in some way.

In this book, I make the case for treating them instead as three independently important foundations of morality. The resulting plural-foundation moral theory belongs to the type pioneered by W.D. Ross. Like Ross, I think that there is a plurality of fundamental moral norms with no master-principle governing their contributions to overall moral rightness. However, my view departs from Ross both in its content and in the type of thing it claims is foundational to morality: it is not a theory of fundamental “prima facie duties”. It also gives a more elaborate account of the ways in which the content of morality is generated from its foundations.


There are three parts to the project. Part I sets out the foundations of the theory and explains the challenges that it needs to meet. These include the challenges of explaining the apparent unity of morality (if it has more than one foundation), its evident complexity (if there are only three), and of seeing how a theory of this kind can offer us any useful guidance in thinking about situations in which reasons deriving from these independent sources conflict.

Part II then gives an account of how the content of morality is generated from its three foundations, and shows how these challenges can be met. An emphasis is given to explaining the different ways in which one morally significant consideration can countervail against another not just by outweighing, but by undermining it – depriving it of the reason-giving force it would otherwise have had.

The book concludes in Part III with three detailed applications of the theory: to the questions surrounding paternalism, the use of others as means, and our moral responsibilities as consumers. The overall aim of the book is to illuminate the structure of morality by showing how its complex content is generated from a relatively simple set of underlying elements – with the complexity resulting from the various ways in which one part of morality can derive from another, and the various ways in which they can interact.