The Centre for Philosophical Psychology at the University of Antwerp held a workshop on the 27th November 2018 on the topic of belief and belief formation. Here’s a brief summary of the excellent talks given at the workshop, kindly written by Dan Williams. 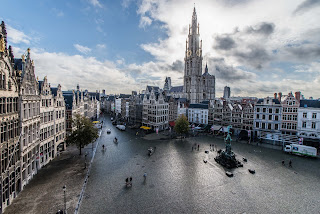 Neil Levy (Oxford/Macquarie) gave the first talk, entitled ‘Not so hypocritical after all: how we change our minds without noticing’. Levy focused on a phenomenon that many people assume to be a form of hypocrisy—namely, cases in which individuals come to change their beliefs about, say, politics when popular opinion (or the popular opinion within their relevant tribe or coalition) changes. (Levy gave the example of many ‘Never Trumpers’ who then apparently changed their opinion of Trump when he came to power).

Levy argued that at least some examples of this phenomenon are in fact not best understood as a form of hypocrisy; rather, they arise from people forming beliefs “rationally”. Specifically, he drew attention to two important features of human belief formation: first, our evolutionary dependence on cumulative cultural evolution, and the suite of psychological mechanisms that facilitate the cultural learning that underlies it; second, the way in which we offload representational states such as beliefs onto the surrounding environment.

These two features of human psychology, Levy argued, can help to explain many apparent examples of hypocrisy: when an individual radically changes his or her opinion on, say, Trump, this need not be an example of motivated reasoning, “tribalism”, or hypocrisy; rather, it can simply be a result of these—usually adaptive and truth-tracking—features of human psychology.

Eric Mandelbaum (CUNY) gave the second talk on ‘The Fragmentation of Belief’. Mandelbaum sought to develop a form of “psychofunctionalism”, according to which beliefs are best understood as real entities within the mind that play the functional role of beliefs as described by our best contemporary cognitive science.

Psychofunctionalism has traditionally been held back, Mandelbaum argued, by the lack of concrete proposals on what the relevant psychological laws or regularities that actually govern belief formation consist in. To address this, Mandelbaum sought to sketch a cognitive architecture, focusing specifically on the issue of how beliefs are stored.

At the core of his proposal was the idea that belief storage is highly fragmented; rather than a unified web of belief, he argued that our best research in cognitive science supports a view of our cognitive architecture as consisting of many distinct, independently accessible data structures which Mandelbaum calls ‘fragments’.

This architecture, Mandelbaum argued, generates many psychological phenomena that standard “web of belief”-based theories struggle to account for, such as inconsistent beliefs, redundant beliefs, and distinct bodies of information on the same subject.

The third speaker was Marianna Bergamaschi Ganapini (Union College), speaking on the topic of ‘Belief’s Minimal Rationality’. Ganapini focused on apparent examples of beliefs such as clinical delusions and conspiracy theories that lack many of the prototypical characteristics of beliefs.

She argued against both traditionalist view of belief, which describe very high standards for something to achieve the status of a belief, and a revisionist position, which grants the status of belief to mental states on very minimal grounds (for example, whether someone is willing to sincerely assert that they hold the belief).

She then put forward a view of beliefs called “Moderate Traditionalism”, which constitutes a kind of middle-path between these two options. The upshot of this view, she argued, is that some delusions and conspiracy theorists will not qualify as beliefs even if the individuals that harbour them sincerely assert that they believe them.

Jake Quilty-Dunn (Oxford) gave the fourth talk on ‘Functionalism about Belief’. Quilty-Dunn criticised widespread functionalist views of beliefs and other propositional attitudes, according to which beliefs are mental states that perform specific functional roles. He first sought to explore what these putative functional roles might be, focusing especially on the psychological laws/regularities that beliefs apparently participate in according to cognitive dissonance theory.

Instead, he proposed a “primitivist” alternative to psychofunctionalism, according to which propositional attitudes should be understood as primitive formal properties of certain mental states, analogous to the way in which symbols are individuated by their formal properties.

The final talk was given by Neil Van Leeuwen (Georgia State) on ‘Two Theoretical Roles for “Belief”’. Van Leeuwen argued that vast numbers of philosophers and cognitive scientists have mistakenly assumed that two very different theoretical roles associated with the term “belief” identify the same kind of psychological state.

Van Leeuwen argued that the functional roles associated with these two mental states are so different that we should resist the widespread view that they both amount to the same kind of mental state.
Posted by Lisa Bortolotti at 08:00