In September 2018, a team of Birmingham philosophers, comprising Kathy Puddifoot, Valeria Motta, Matilde Aliffi, EmaSullivan-Bissett and myself, were in sunny Rijeka, Croatia, to talk a whole lot of Epistemic Innocence at the European Society for Philosophy and Psychology.

Epistemic innocence is the idea at the heart of our research at Project PERFECT. A cognition is epistemically innocent if it is irrational or inaccurate and operates in ways that could increase the chance of acquiring knowledge or understanding, where alternative, less costly cognitions that bring the same benefits are unavailable. Over the last few years, researchers on the project and beyond have investigated the implications of epistemic innocence in a range of domains (see a list of relevant work here). Our epistemic innocence symposium at ESPP2018 was a mark of the relative maturity of the concept, and the opportunity for us to start expanding its applications.
I went first, exploring the phenomenon of confabulation, where a person gives an explanation that is not grounded in evidence, without any intention to deceive. Confabulatory explanations sometimes arise where there is cognitive decline, such as in dementia or brain injury, and also in a number of psychiatric conditions. But there are a range of studies which demonstrate that all of us, regardless of our cognitive function, regularly confabulate about all sorts of things from consumer choices to moral convictions and political decisions.

I suggested that confabulation might emanate from a general tendency for producing narrative explanations which itself has a range of benefits. I think there might be considerable social and psychological benefits to such a tendency. But there is also evidence to suggest that various forms of narrative construction and story-telling can actually aid cognitive functioning and information retention. I argued that whilst our narrative tendency can produce fabrications which depart from reality, it also gives us a means for preserving information that we cannot so easily do when we don’t recruit narrative forms, and so we can think of this tendency as epistemically innocent. 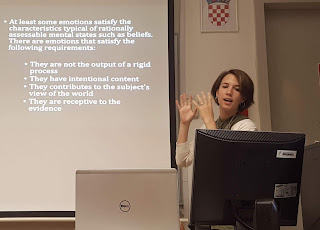 Next, Valeria Motta and Matilde Aliffi headed into uncharted waters for the notion of epistemic innocence, thinking about it in the context of emotions, and asking specifically whether there are any epistemic benefits to the emotion of loneliness. They first gave their account of how we should think about loneliness: as a painful subjective emotional state occurring when there is a discrepancy between desired and achieved patterns of social interaction. First, we need to know whether emotional states such as loneliness are rationally assessable. Matilde and Valeria convinced us that at least some emotions can be because they have intentional content, are receptive to evidence, and shape the subject's view of the world.

They argued that loneliness may be considered irrational when a subject feels lonely even when she has evidence that social interactions are available to her. They moved on to defend the position that even the cases that could be deemed irrational, present a number of epistemic benefits. Some people who experience loneliness can also experience an enhancement of self-knowledge, because they recognise the basic need for human contact and meaningful social relations. Valeria and Matilde argued, further, that there are cases of loneliness which are epistemically innocent, yet practically beneficial, because they foster the subject's motivation to explore new and creative possibilities to connect with people. 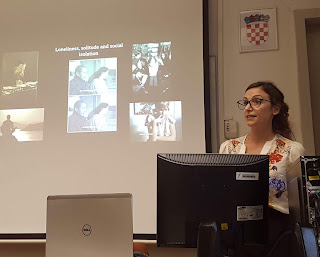 This constitutes a new application of the concept of epistemic innocence, showing that the notion allows us to tell a richer story when investigating the epistemic status of monothematic delusions, one which resists the trade-off view of pragmatic benefits and epistemic costs. Though monothematic delusions are often characterised by appeal to their epistemic costs, they can play a positive epistemic role, a fact that, Ema argued, is independent of the characteristics of their formation, and as such is a conclusion which all empiricists can agree upon. 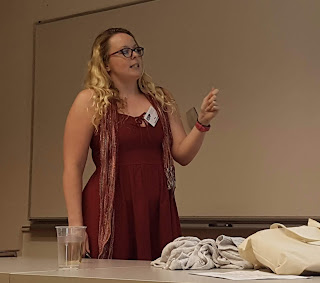 Kathy Puddifoot concluded our symposium presentations, taking the notion of epistemic innocence beyond the academy and research lab, to inform policy and practice out in the world – and an important bit of the world at that – the court room. Kathy first recruited findings from psychology which establish that eyewitnesses are susceptible to the misinformation effect: this is where people recollect that they experienced an event in a way that is consistent with information provided to them after the event itself.

Kathy argued that the misinformation effect is produced by cognitive mechanisms that are epistemically innocent: although the mechanisms produce errors, Kathy maintained that they also bring substantial epistemic benefits in so far as these mechanisms underlie broadly successful remembering in the first place. Kathy suggested that eyewitnesses can make errors when testifying due to the ordinary operation of these cognitive mechanisms that in general increase the chance of them providing correct details about a criminal case.

However, jurors are likely to judge the errors that result from the misinformation effect to indicate that the eyewitness is generally unreliable. Kathy then made the case for informing jurors about the psychological findings on the misinformation effect to help them better understand the kind of errors witnesses are likely to make, and that our cognitive shortcomings do not mean we are wholly unreliable rememberers. 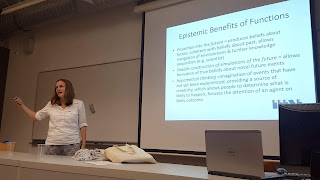 So, there we have it: the notion of epistemic innocence prompting us to think about our narrative tendencies; the epistemic import of seemingly irrational instances of loneliness; as a means to find common ground between one-factor and two-factor theorists about delusion formation; and to potentially instruct jurors to help them better judge the reliability of eyewitness testimony.

What other applications might epistemic innocence have?
Posted by Sophie Stammers at 08:00