This cross-disciplinary symposium on the nature and implications of human and artificial autonomy was organised by Anastasia Christakou and held at the Henley Business School at the University of Reading on 8th May 2019. 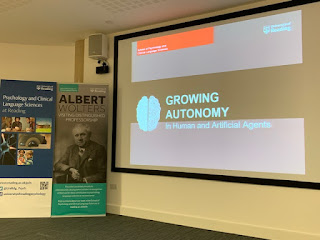 Josh Bongard (University of Vermont) opened the workshop presenting his research in robotics, where he and his team challenge the Cartesian assumption that body and brain are separate by simulating first, and creating then robots that have body plans adapting to changes in morphology.

Bongard also addressed important questions about AI safety and AI ethics. Based on a recent publication on Machine Behaviour in Nature, he argued that we should treat machine behaviour in the same way as we treat animal behaviour, as something that evolves. 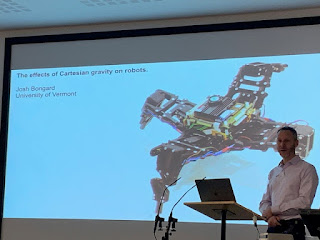 Next Emma Borg (University of Reading) presented a paper on understanding agency in other people and in ourselves. She started comparing two accounts of how we explain and predict the agency of others, behaviour-reading and mind-reading, and argued for the latter.

In the second part of the talk, Borg asked about the plausibility of mind-reading account when applied to the explanation and prediction of first-person agency. Reflectivism says that we know what we are doing next because we consciously deliberate about it but Borg mentioned three challenges to the reflectivist model.

Borg moved on to Agency Skepticism which says that we are never responsible for what we do and we never choose on the basis of reasons. For Borg, this view is too extreme even considering the evidence for motivated cognition and fallibilism. So she settled for an intermediate position between Reflectivism and Agency Skepticism. 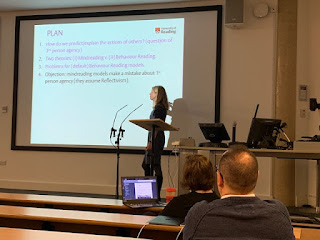 After the lunch break, it was Cecilia Heyes's turn. Heyes (University of Oxford) talked about Growing Gadgets, starting with the statement that humans have a richer and more diverse lives than any other animal, including fine arts, science, sport, etc. What makes human such peculiar animals? One answer is that humans have distinctive cognitive mechanisms. Language, mind-reading, mental time travel, imitation, moral reasoning, causal cognition, mental mapping are some examples.

Such mechanisms have been described by evolutionary psychologists as "cognitive instincts" due to genetic selection and giving rise to individual autonomy, where experience is attributed a triggering role. Heyes is concerned about this description and argued that it needs some "radical updating". Heyes prefers to talk about "cognitive gadgets" due to cultural selection and giving rise to collective autonomy. 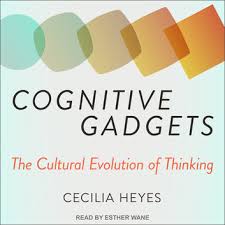 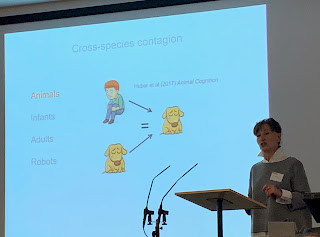 Although imitation is present to some extent in other animals, human imitation is unique. According to Heyes, imitation is not a cognitive instinct as it was believed, but it is learnt though social experience (e.g. exposure to optical mirrors, synchronised movement like dancing, interaction with caregivers), so it is a cognitive gadget.

Next week I will report on the rest of the workshop! Watch this space.