This post is by Anthony S. David, Director of the Institute of Mental Health at University College London. Here he talks about his new book, Into the Abyss: a neuropsychiatrist’s notes on troubled minds (Oneworld Publications, 2020). 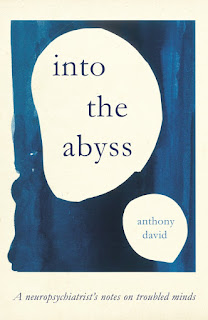 When I submitted a title for my first non-academic book I did so with some trepidation. Apart from sounding somewhat negative, wouldn’t people think it was something about mountaineering, a cautionary tale perhaps? As I explained to my concerned editor, the intended readership like those of this blog would be, “interested in themes at the intersection of philosophy, psychology, and psychiatry” and would instantly pick up the reference to Jaspers, the early 20th Century philosopher-psychiatrist. Somehow he wasn’t reassured.

But the abyss metaphor is a powerful descriptor of the challenge of understanding the experience of the person who is mentally ill – to reach out across the abyss into what Jaspers called ‘an impenetrable country’, the mind of the disordered – especially where the disorder is in some sense extreme or severe, as in psychosis. Anyone of those interested in the 3 Ps mentioned above, and especially if they have a therapeutic role, will see this as the essence of our job description.

That job description, to put it grandly, to understand the human condition especially in extremis is always of course a challenge and perhaps an impossible one, yet one many of us find hard to resist. So whether it is a person suffering from nihilistic delusions following a brain injury, or someone with an unusual eating disorder, or, a functional neurological disorder so extreme that it renders the person comatose, there has to be, or so we believe, a way of comprehending and even explaining. And maybe, every so often, we may find jointly, a pathway, a bridge, reconnecting their world with ours.

In writing these extended case histories it is clear that finding a narrative is not just novelist’s work as German psychiatrist Kurt Schneider once put it, but something mental health professionals and indeed every one of us tries to do to make sense of our lives – particularly when faced with adversity or loss. It cannot be a mere fiction, a gloss or a re-writing of history but there is a creative element which fills in gaps and which provides at least a framework for understanding what would otherwise be, in Jaspers words, un-understandable.


One of the most notorious counteractions to Jaspers’ un-understandability of psychosis claim came from R.D. Laing who in The Divided Self (1960/2010; Modern Classics. Penguin Books, London) sought to make psychosis ‘more socially intelligible’ than had hitherto be thought possible by delving into individuals’ ‘existential phenomenology’ and their family interactions. He did so with great sensitivity and skill but not always in ways which were transparent and replicable. It is the bio-psycho-social approach which is now our all-purpose methodology and explanatory model.

The model proposed in the 1970s by George Engel, a psychologically minded US physician, has come under fire from all sides as being, both too obvious (like motherhood and apple pie), and too vague and indefinable. Thankfully, we now have Derek Bolton and Grant Gillett’s exposition (The Biopsychosocial Model of Health and Disease: New Philosophical and Scientific Developments. Palgrave, 2019) and intellectual underpinning of the model to help us bolster our adherence to it.

In some ways what I was trying to achieve in Into the Abyss was an illustration of the subtle power of the biopsychosocial approach. How all the constitutive elements must be considered in any presentation but each has to be weighted differently as appropriate. We can only do this by attempting an empathic understanding, by working collaboratively with the person in distress in front of us; by examining our own assumptions and being receptive to what’s going on in our brains, our minds and our society. When we do this we find that the abyss closes before our very eyes and that we are all part of the same world after all.