Today's post is by Guy Axtell, professor of philosophy at Radford University, who writes about his new book on religious luck. If, after reading the post, you want to know more, you can listen to the author’s recent podcast interview with Robert Talisse for the New Books in Philosophy.

Problems of Religious Luck: Assessing the Limits of Reasonable Religious Disagreement (Lexington Books, 2019) applies philosophy of luck and risk in critiquing religious fundamentalism, and in particular, the tendency towards ‘normalizing’ polarized and polemical religious apologetics. It may seem like quite a departure from the usual association of inductive risk with policy decisions regarding science and technology, but Axtell finds the concept of inductive risk portable, and indeed useful for discussion of ‘risky’ belief or acceptance more generally. Epistemic luck and risk are developed as closely connected concepts.

The book sketches an account of well and ill-founded nurtured belief based upon doxastic strategies involve low to high degrees of inductive risk: the moral and epistemic risk of ‘getting it wrong’ in an inductive context of inquiry. Philosophy of luck and risk are presented in this book as aiding our understanding of what is going on, at least logically and psychologically, when persons, theologies, or purported revelations ascribe various kinds of religiously relevant traits to insiders and outsiders of a faith tradition in sharply asymmetric fashion.

Our inductive risk account shows as epistemically significant not just the diversity of beliefs in a domain, but contrariety of those beliefs. inductive risk account argues for the claim that the epistemic status of belief is challenged not just by symmetrical contrariety, but more especially by polarized and polemical contrariety. The connections between “religious luck” and “inductive epistemic risk,” this book argues, allow researchers to cross disciplinary boundaries in new ways. 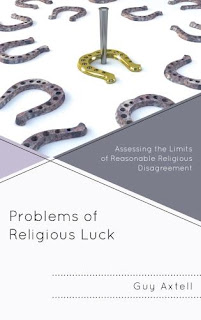 The book applies anti-risk epistemology by trying to show how the ascending degrees of inductive risk in an agent’s doxastic strategy contribute to a philosophical account of how to distinguish between benign luck and the malign modal luck. It develops an inductive risk-based account of what it means to motivate serious etiological challenges, and to support them empirically through markers of bias. The ethics of belief is also addressed in the book from a focus on responsible risk management.

Doxastic responsibility is understood in terms of the degree of riskiness of agents’ doxastic strategies, which is in turn most objectively measured through accordance or violation of inductive norms. Doxastic responsibility is attributable to agents on the basis of how epistemically risky was the process or strategies of inquiry salient in the etiology of their belief or in their maintenance of a belief already held. Highly fideistic conceptions of faith are some of the most problematic, and markers of inductive risk are developed to help provide a scale for distinguishing strong from moderate religious fideism. Some of the key concepts discussed include: