The Royal College of Psychiatrists hosted its Faculty of Neuropsychiatry Annual Conference on 13-14 September 2018 in London. I was fortunate to attend the first day and I am going to report on some of the interesting talks I listened to. 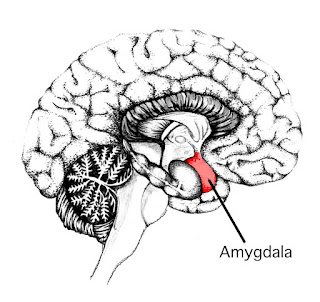 In the first session speakers focused on neuroscience for psychiatrists, and Paul Johns, author of Clinical Neuroscience, addressed the functional anatomy of the human amygdala.

The amygdala is constantly looking out for dangers and helps us evaluate the emotional significance of events. It facilitates social interactions as it enables us to read other people's minds. Further, the amygdala is involved in learning and episodic memory for important events. It is responsible for an implicit emotional memory of negative events to help us avoid adverse stimuli.

The amygdala is for assessing environmental cues to determine the adequate response to threats. So patients without the amygdala are fearless but it is possible to experimentally induce a panic attack by giving them the impression that they are suffocating. So the amygdala is not necessary for feeling scared (the hypothalamus is).


The second speaker, Nandini Mullatti (King's College London), described the role of neurophysiology in mental health settings with a focus on epilepsy. By looking at some patients' history and at the manifestation of unusual symptoms (e.g., a woman claiming "she was losing her face"), Mullatti showed that clinical neurophysiology provides evidence to decide whether symptoms are organic or functional and further has an important role to play in the evaluation of functional symptoms.

The third speaker in this session, Oliver Robinson (University College London), addressed the history of neuroimaging in mood and anxiety. He focused on depression (unipolar and bipolar) and showed some inconsistent imaging results about whether these conditions are correlated with increased or decreased activity in the subgenual cingulate region of the brain. 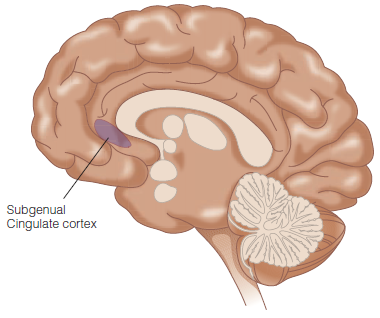 Robinson moved to the prediction error model and the learning process. In depression, people seem to have reduced responses to positive events but increases responses to adverse events. That means that they learn differently and do not adapt their behaviour to the stimuli available to them in the same way as people without depression. This points to an affective bias. However, recent studies conflict with this simple picture which leads to a cautious approach to the applications of neuroimaging.

In the second session, on Conceptions of the Mind, Andrea Cavanna (Aston University) presented on behavioural neurology. He started from a clear and engaging summary of the evolution of the human brain to characterise some disorders as the reptilian brain taking over and no longer being kept in check by the innovations to be found in the mammalian or neo-mammalian brain. Cavanna used the case of Tourette syndrome to illustrate some of the key points.

I was the second speaker (Lisa Bortolotti, University of Birmingham) and talked about how the delusions literature can inform our conception of beliefs, rationality, and mental health. In short, I argued that some commonly held beliefs about the consequences of irrationality are revealed to be myths once we take delusions to be paradigmatic instances of epistemic irrationality.

Karl Friston (University of College London) was the third speaker in the Conceptions of the Mind session. He started explaining the signs and symptoms of schizophrenia in terms of false inference and introduced the history of the Bayesian brain theory. Perception is hypothesis casting and most of what we do is go through life minimising prediction error. This approach gives us a good story of the positive symptoms of schizophrenia: sensory constraints are disconnected from the higher end of the process where we adopt beliefs that are models of the world.

Day 1 of the conference was very intense and informative for an interdisciplinary audience and provided some suggestions for how to improve clinical practice.