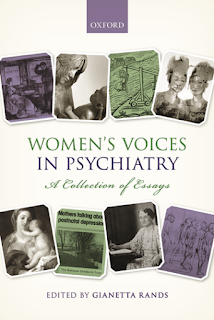 Women's Voices in Psychiatry was published in June 2018 by Oxford University Press. It is a collection of essays by women psychiatrists working, or who have worked, in the NHS. In addition, medical journalist Abi Rimmer writes on the history of women in British Medicine and Claire Murdoch, National Mental Health director at NHS England, reminisces about training as a registered mental nurse at Friern Hospital in the 1980s.

This anthology has had a momentum of its own from the very start. I was just in the right place, at the right time. With encouragement from Baroness Elaine Murphy, psychiatrist, researcher, senior manager and cross bench peer, and support from several individuals and committees at Oxford University Press this book was on its way.

In 2015, I retired from the NHS and presented an ‘exit seminar’ titled “Career Reflections of a 1970s Feminist” using my experiences of training and working in medicine and psychiatry from 1975 to 2015 to highlight women’s issues in general. Afterwards, I was surprised by comments from current women psychiatry trainees essentially saying that not much had changed over 40 years in terms of their work experiences. This seminar formed the basis of the first chapter of Women’s Voices.

I now work as an independent psychiatrist and my clinical practice focuses on dementias, brain injuries and mental capacity. A long-term preoccupation of mine has been post flight confusion. That is, air passengers being confused after flying. Many colleagues know about this and many of us have seen dozens of cases. It seems to mostly affect older people whose physiological autoregulation mechanisms may not be so good as those of younger people. And, of course, aviation and altitude medicine research is almost exclusively done on fit young men. I continue to rant about this because I think it is a public health scandal.

I have never aspired to write or edit a book but Women’s Voices was an important project and I had the energy, time and contacts needed to commit to it. For me it was essential to record, in real time, women’s experiences as professionals and as patients in mental health services. Too often women have been silenced and the gender publication gap in scientific publications is one example of this. There are many gender differences discussed in these essays. Whilst editing them I was constantly overwhelmed by their quality, integrity, and content, and so inspired by my wonderful colleagues. I can’t imagine that anyone won’t find every word fascinating.

The essays are a range of autobiographies, biographies, case based studies, reviews of clinical literature, and historical descriptions. For example, Fiona Subotsky scrutinizes the archives in her essay “The Entry of Women into Psychiatry”, and Jane Mounty, Anne Cremona and Rosalind Ramsey describe the more recent history of the Women’s Mental Health Special Interest Group.

Rosemary Lethem writes as psychiatrist and patient having suffered with bipolar affective disorder throughout her adult life. Her bravery and stamina are extraordinary and anyone doubting that they can manage their career and their mental illness will be inspired by her experiences and tips.

There are chapters about Perinatal Psychiatry (Jacqui Humphreys), The Role of Women in Intellectual Difficulties (Angela Hassiotis and Rupal Dave), Women in Forensic services (Jail Birds by Annie Bartlett), and a contemplation about whether or not women only mental health units are needed (Aoife Singh).

For the more psychodynamic essays, Jo O’Reilly considers the need for psychotherapist support in mental health units and proposes a model of the “Maternal Lap” with its changing concavities. An important update of our understanding of child sex abuse and complex trauma is presented by Joanne Stubley, Maria Eyres and Victoria Barker. Sandra Evans and Jane Garner write on “Old Age, Women, and Dynamic Psychotherapy” firmly refuting the belief that psychotherapy is only for the young.

There are chapters about Dementia and how to reduce its risks (Joanne Rodda), about difficult, life-and-death clinical decisions that have involved the Court of Protection (Clementine Maddock), and about the evolution of services - Claire Hilton’s biography of Barbara Robb, and Amanda Thomsell interviewing Nori Graham about Old Age Psychiatry and working with the Alzheimers Society UK and International.

A collection of essays by psychiatrists would not be complete without descriptions of our training (Philippa Greenfield and Georgina Fozard), and our experiences as trainers of psychiatrists (Hannah Fosker and Ann Boyle); but this time it’s women’s views. In addition, inspiring reflections from the Royal College of Psychiatrists President, Wendy Burn, and recent past president, Sue Bailey, give insights into their roads to success.

These essays are interspersed with short ‘profiles’ of pioneering colleagues such as Helen Boyle, Fiona Caldicott, Dora Black, Helen Green Allison, Eluned Woodford-Williams, and nurses Lisbeth Hockey and Annie Altschul. Poems by GP poet Emily Wills create pauses for reflection about women as doctors, as patients, and many aspects of women in general.