Today's post is written by Helen de Cruz. Helen is Senior Lecturer in Philosophy at Oxford Brookes University, UK. Her publications are in empirically-informed Philosophy of Cognitive Science, Philosophy of Religion, Social Epistemology, and Metaphilosophy.

Helen's overarching research project is an investigation of how human engage in thinking about abstract domains such as Theology, Mathematics, and Science, what it means for limited, embodied beings like us to think about these topics, and what epistemic conclusions we can draw from this. Here, she introduces her new book "Religious Disagreement". 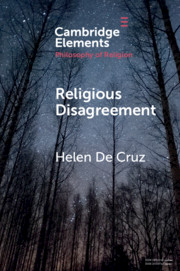 While religious disagreement is common, it remains quite intractable to philosophers. Unlike idealized and clean cases, such as adding up and dividing the bill in a restaurant or visually discerning which horse finishes first in a race, religious disagreement is messy and tied up to many features of our identity. Moreover, religion also seems to rely on private evidence that is not easily shared, such as personal religious experiences. Because of this, it seems difficult to apply the notion of an epistemic peer to a religious dissenter.

I argue in my brief monograph “Religious Disagreement” that disagreement presents a form of higher-order evidence even if we cannot ascertain that our interlocutor is an exact epistemic peer or epistemic superior.

I present a conciliationist point of view: I argue that the religious beliefs of others amount to evidence that should lead us to at the very least evaluate, and sometimes alter, our religious views.

I also look at the epistemic significance of religious agreement, and how we should evaluate its evidential value (chapter 4). Chapter 5 looks at what we can learn from disagreement among religious experts. Finally, chapter 6 explores why philosophy matters for religious disagreement among non-philosophers, particularly in the public sphere.

In keeping with the topic of this book, I structured each chapter (except the introductory and concluding chapter) around a central figure who has done major conceptual work within a given religious tradition: al-Ghazālī (chapter 2), Augustine (chapter 3), Calvin (chapter 4), and Maimonides (chapter 5).


For example, Chapter 2 on irrelevant influences and religious disagreement focuses on al-Ghazālī, a Medieval Muslim theologian who lived in what is now Iran. He worried about religious diversity and the threat it poses to the justification of his own religious beliefs. He observed that Muslim children always grow up to be Muslims, Jewish children into Jewish adults, and Christian children into Christian adults. He also thought that Aristotelian philosophers too easily and readily accepted the tradition they were taught in. But how could he be sure that his own religious and philosophical beliefs were true, given the large influence of factors beyond his control?

Al-Ghazālī’s initial response to this worry was that he could, as a philosopher, critically reflect on his ideas so that testimony did not exert this negative influence: “the bonds of mere authority (taqlīd) ceased to hold me and inherited beliefs lost their grip upon me”. But this seems unlikely, as I have found in earlier experimental philosophical work that philosophers of religion — who carefully reflect on religious views — are still very much influenced by factors such as their education and upbringing.

His second response, the cultivation of religious (Sufi) practices to help overcome cognitive limitations, seems more promising. However, mystical experience tends to vary with the religious traditions in which they occur, so it is not clear that knowledge based on this would escape the arbitrariness objection. It is no coincidence that al-Ghazālī had mystical experiences that support Islam, while Teresa of Ávila had experiences that were in line with Catholicism.

I’m inclined to think (as authors such as Gary Gutting and W.V.O. Quine have defended earlier) that there is nothing special about philosophy. Philosophers don't seem to have access to a special fount of intuitions, as their intuitions seem to be subject to the same kinds of framing effects as those of non-philosophers.

However, I have argued earlier that philosophers are experts of some sort: they can come up with good stories and scenarios that elicit intuitions, and they carefully look at objections and support for arguments. The fact that there is nothing inherently philosophical about philosophy is a cause for optimism.

If philosophers draw on the same sorts of reasoning and resources as ordinary people (e.g., the empirical evidence for a claim, the internal coherence for a claim) this also means that philosophical knowledge does not require any special defence or justification. And it also means that philosophers of religion have thought through problems that beset the ordinary person in their more reflective moments, such as whether an omnibenevolent God can exist in the face of devastating evil?

For this reason, I have, for example, recently obtained funds from the APA’s diversity and inclusiveness fund to sponsor a competition at the Journal of Analytic Theology (where I am co-editor) for best paper from an underrepresented theological tradition. Ultimately, I think that intellectual diversity and thoughtful debate — both within philosophy and the wider public sphere — can help communities inside and outside of philosophy to obtain more justified religious beliefs. 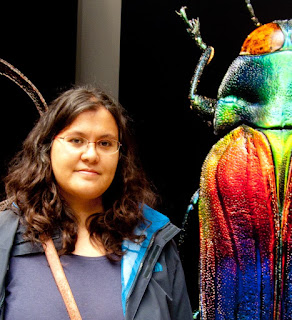