Our series of posts on confabulation continues, featuring papers that appear in a special issue of Topoi on the topic, guest edited by Sophie Stammers and Lisa Bortolotti. Today's post, on gaslighting, confabulation, and epistemic innocence, is by Andrew Spear, Philosophy Faculty at Grand Valley State University near Grand Rapids, Michigan. 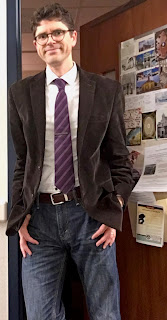 In Gaslighting, Confabulation, and Epistemic Innocence, I suggest that confabulation plays a central role in many paradigm examples of gaslighting, and that appreciating this sheds some light on what it takes for a defective cognition (such as confabulation) to be epistemically innocent.

The central feature of gaslighting is the attempt by one agent to undermine another’s epistemic self-trust, her conception of herself as an independent locus of experience, thought, and judgment.

I model gaslighting on the phenomenon of epistemic peer-disagreement (the gaslighter and his victim disagree specifically about whether or not the victim’s cognitive faculties and grasp of her own situation are reliable). It is this epistemic dimension that connects gaslighting to confabulation.

Confabulation has been argued to be sometimes epistemically innocent because subjects who engage in it may be more likely to achieve rational or true beliefs in the future; and because confabulation can assist a subject in maintaining a coherent sense of her own epistemic agency, which is at the very least a pre-condition for future epistemic improvement. The role of confabulation in typical cases of gaslighting fails both of these conditions in instructive ways.


The deployment of confabulation in gaslighting generates an epistemically poisonous feedback loop. Confabulation aids and abets the gaslighter in his project, while it sets the victim ever further off the mark of what is really going on, so it does not make the formation of future true beliefs more likely for either of them.

Also, while confabulation in gaslighting allows both the perpetrator and the victim to maintain certain kinds of coherence in their self-concepts or belief-sets, the self-concepts/coherence so maintained are such as to undermine rather than enable sincere future attempts at acquiring true beliefs.

I do not take the confabulation at issue to undermine current analyses of epistemic innocence; rather I think it shows two things. First, that the social conditions under which a defective cognition is deployed can make a big difference to whether it counts as epistemically innocent, opening up the possibility of a more nuanced and systematic analysis of the social and interpersonal conditions friendly (rather than hostile) to epistemically innocent cognitions.

In future research I am interested in pursuing both of the foregoing lines of inquiry. Most immediately, I am interested in the question of to what extent there are large-scale social and political analogs to the phenomenon of interpersonal gaslighting dealt with in my essay, and of the roles of confabulation and epistemically innocent cognitions in these.