This post is written by Tom Cochrane, who is a British philosopher working at Flinders University in Adelaide, Australia. One of his main aims is to draw on facts about psychology to develop insights about the good life.

Tom has worked a lot on emotions and aesthetics. He also has specific interests in mental disorders- including a co-authored article on Obsessive Compulsive Disorder at Mind &Language that readers of this blog may find interesting. 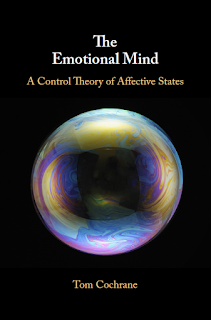 My new book The Emotional Mind (2018) is mostly focused on how the various phenomena we associate with the emotions—feelings, behaviours, moods, pain and pleasure, rational cognition, character traits and so on—all fit together.

The overall picture I propose is of fundamental concern-regulating routines that get steadily elaborated as new ways to represent information come along. Thus the book starts by outlining the fundamental routines, and then builds on this layer and layer until we reach a pretty complete description of person-level emotional experience.

Although I do not say much about mental disorders in the book, given the major role that emotions play in mental health it is not hard to draw connections. For instance, one relevant connection comes in Chapter Six where I argue that the rational regulation of our emotions is itself a kind of meta-emotional process. However, since it is particularly in line with the interests of this blog, I want to focus here on my model of personality traits (presented in chapter 7), specifically those personality traits that could be considered unhealthy, such as neuroticism.

My main claim about personality traits is that they are long-term strategies for regulating concerns. Every personality trait combines a heightened sensitivity towards a certain concern with an enhanced capacity to protect that concern. For example, agreeableness can be understood as a strategy in which the individual is relatively oriented towards supportive social relationships and is relatively skilled in serving this concern (e.g. due to good empathic skills). Similarly, neuroticism is best understood as a heightened orientation towards sources of danger or loss and an enhanced capacity to notice when these things may occur.

It is important to note that every trait has its own costs and benefits. It takes energy to serve social relationships, or to monitor dangers, and these costs must be compensated by rewards of securing a supportive relationship, or avoiding danger. There are moreover risks that one’s agreeableness will be taken advantage of, or that one’s sensitivity to danger will lead one to avoid safe situations.

This is why enhanced capacities are partly constitutive of traits. If one is not reliably getting the benefits and suffering all the risks, it’s a bad strategy, and eventually, the psychological system *should* give it up. But where there is enhanced capacity, it should more reliably deliver the targeted benefit, encouraging the further deployment of that capacity in the future. So to the extent that rehearsal enhances capacity, the trait can be self-reinforcing.

To identify a trait as unhealthy then depends on whether costs are outweighing benefits and if so, whether the system is able to adjust the personality strategy accordingly. We may also point to cases where a value is readily available but the individual has a tendency to be unresponsive to it. What we shouldn’t say however is that neuroticism is automatically unhealthy.

I have blogged about other aspects of the book here. And a précis of the book is available here. I’d very much like to hear what people think!