Walter grew up and received all of his education in the US. Following a fellowship in clinical medical ethics at the University of Chicago, for 5 years (2000-2005) he was clinical ethicist at 3 hospitals in Montreal and Vancouver. This is largely how he developed his interest in research and clinical aspects of psychiatry. 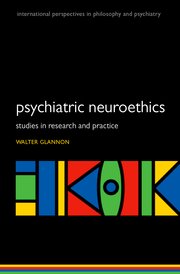 Advances in psychiatric research and clinical psychiatry in the last 30 years have given rise to a host of new questions that lie at the intersection of psychiatry, neuroscience, philosophy and law. Such questions include:

Psychiatric Neuroethics explores these questions in a comprehensive and systematic way, discussing the medical and philosophical implications of neuroscience and the Research Domain Criteria (RDoc) in the fields of psychiatry and mental health. It examines the extent to which circuit-based criteria can offer a satisfactory explanation of psychiatric disorders and how they compare with the symptom-based criteria of the Diagnostic and Statistical Manual of Mental Disorders (DSMV).

One issue that may be of particular interest to PERFECT is my explanation of major psychiatric disorders as disorders of the will in Chapter 2. This is relevant to delusional and similar states.  Although the phrase does not appear in the Recent DSM-5, the DSM-IV notes that major psychiatric disorders involve "an important loss of freedom." One can ask whether, or to what extent, delusions impair this freedom. More specifically, to choose and act freely, one must have a certain degree of insight into one's condition and one's relation to the social and natural environment.


If psychiatric disorders involve delusions that impair insight, then they could impair reasoning and decision-making and in this respect impair free will.  These capacities come in degrees.  There is a spectrum of free agency that corresponds to neural and mental function and dysfunction.  Although behavioral criteria can in many cases confirm how much insight a person affected by a psychiatric disorder has, in some cases it may be difficult to know how much insight and control one has of one's thought and behavior.  It is not so much the disorder itself but more so the unique neural-mental interaction in each person that is important in assessing whether their will is impaired or intact.