Bedlam: the Asylum and Beyond

From 15 September 2016 to 15 January 2017 the Wellcome Collection is hosting an exhibition entitled: Bedlam, the Asylum and Beyond, exploring the recent history of psychiatry via the evolution of one asylum, the Bethlem Royal Hospital in London, often just called 'Bedlam' (see image of the Hospital below, Wellcome Images). 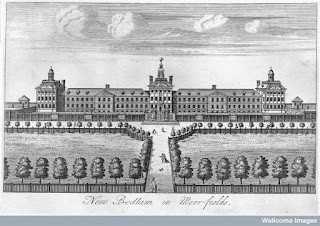 The exhibition is very rich and what is most striking about it is that it offers the perspective of those facing mental health issues on the asylum, and on psychiatry in general, through beautiful artworks and photography, and in the stunning audio companion. One of the premises of the exhibition is that asylums are regarded today 'hell on earth', places where cruel practices were tolerated and the main aim was not to treat people so that they could recover and go back to their lives, but control them and limit their freedom (see 'Scene at Bedlam' below, Wellcome Images). 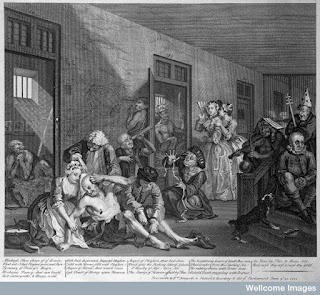 I was really impressed by a series of vignettes by Ugo Guarino, an Italian artist and illustrator who participated in the anti-psychiatry movement. The series is called "Zitti e buoni", an expression meaning "Be quiet and behave", and criticises some psychiatric interventions delimiting people's freedom. In one vignette a doctor opens a man's skull and probes his brain with tools, with the caption: "In nome della scienza", meaning "In the name of science".  Guarino befriended Franco Basaglia, the influential Italian psychiatrist who proposed the closure of all psychiatric hospitals in the seventies, and his work is of great historical importance in the evolution of contemporary thought about psychiatric care.

One provocative idea is that there may be something about the asylum that is not so negative and can be explored and developed at this critical time for psychiatry, when people still struggle to get better despite the plurality of treatment options available to them. So the final message of the exhibition is a message of hope. Modern-day Bedlam has space dedicated to art and craft, and is a much more welcoming place than it once was.

We can take the thought of the good asylum even further, with Madlove, an ideal asylum designed on the basis of the suggestions of experts by experience. The project, run by Hannah Hull and the Vacuum Cleaner, ends with a colourful model of an asylum that is accepting of individual differences and a safe space for experimenting with images and sounds. Or rather, the project is open-ended as visitors are invited to submit their own suggestions about what the ideal asylum should be like.

Another message of hope comes from repeated references to Geel (see the recent Aeon essay on it), the market town in Belgium where there has been what we could call a 'community approach to mental health' for centuries. People with mental health issues are welcomed into the inhabitants' homes as 'boarders' and participate fully in the life and work of the family. This response to mental health issues is a source of inspiration for many.

You still have time to see the exhibition, free at the Wellcome Collection. Don't miss it!